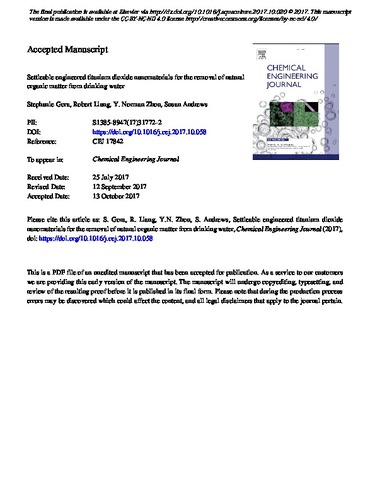 Four linear engineered TiO2 nanomaterials (LENs) were synthesized and evaluated in terms of settlability and their ability to remove natural organic matter (NOM) from river water. The size, surface characteristics, and crystallinity of the LENs were manipulated by varying the temperatures used during the synthesis procedure. All four LENs settled out of purified water more effectively than standard Degussa Evonik Aeroxide P25 nanoparticles. The settling behaviour of the nanomaterials was impacted by surface charge effects and interactions with NOM and ionic species in the river water matrix. The reduction of two disinfection byproduct precursor surrogate parameters, DOC and UV254, by the LENs via adsorption (no irradiation) and photocatalytic degradation under UVA LED irradiation was compared to that by P25 nanoparticles. After 60 minutes of irradiation DOC removal by the LENs ranged from 20 to 50% and UV254 reduction ranged from 65 to 90%. Two of the most promising LENs were reused multiple times and although both materials experienced decreases in treatment efficacy over successive reuse cycles, the reusability of both LENs was equal to or superior to that of P25 nanoparticles. The electrical energy per order required to remove DOC and UV254 from the water ranged from 8 to 36 times higher than that required for UV/H2O2 treatment but comparable to results reported by other researchers using UV/TiO2 for NOM removal. A subset of the nanomaterials evaluated in this study may prove to be a viable alternative to standard TiO2 nanoparticles for the removal of DBP precursors from drinking water, but the characteristics of the water matrix have important effects on settling efficiency and will require site-specific evaluation.