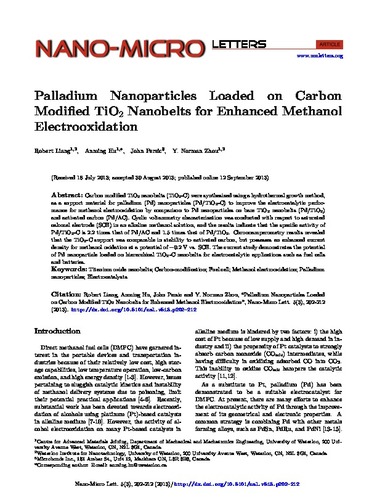 Carbon modified TiO2 nanobelts (TiO2-C) were synthesized using a hydrothermal growth method, as a support material for palladium (Pd) nanoparticles (Pd/TiO2-C) to improve the electrocatalytic performance for methanol electrooxidation by comparison to Pd nanoparticles on bare TiO2 nanobelts (Pd/TiO2) and activated carbon (Pd/AC). Cyclic voltammetry characterization was conducted with respect to saturated calomel electrode (SCE) in an alkaline methanol solution, and the results indicate that the specific activity of Pd/TiO2-C is 2.2 times that of Pd/AC and 1.5 times that of Pd/TiO2. Chronoamperometry results revealed that the TiO2-C support was comparable in stability to activated carbon; but possesses an enhanced current density for methanol oxidation at a potential of -0.2 V vs. SCE. The current study demonstrates the potential of Pd nanoparticle loaded on hierarchical TiO2-C nanobelts for electrocatalytic applications such as fuel cells and batteries.