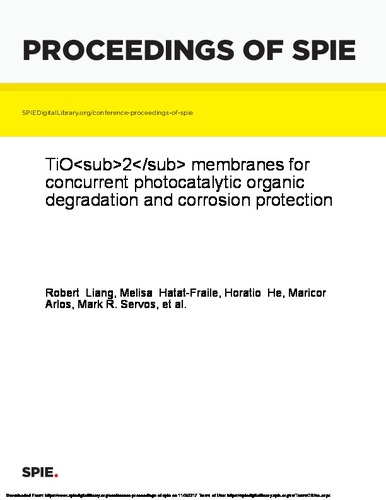 Organic contaminants and corrosion in water treatment effluents are a current global problem and the development of effective methods to facilitate the removal of organic contaminants and corrosion control strategies are required to mitigate this problem. TiO2 nanomaterials that are exposed to UV light can generate electron-hole pairs, which undergo redox reactions to produce hydroxyl radicals from adsorbed molecular oxygen. They hydroxyl radicals are able to oxidize organic contaminants in water. This same process can be used in conjunction to protect metals from corrosion via cathodic polarization. In this work, TiO2 nanomaterials were synthesized and electrophoretically deposited on conductive substrates to serve as films or membranes. An illuminated TiO2 film on a conductive surface served as the photoanode and assisted in the cathodic protection of stainless steel (SS304) and the degradation of organic pollutants, in this case glucose. This proof-of-concept relied on photoelectrochemical experiments conducted using a potentiostat and a xenon lamp illumination source. The open-circuit potential changes that determine whether a metal is protected from corrosion under illumination was observed; and the electrical characteristics of the TiO2 film or membrane under dark and arc lamp illumination conditions were also analyzed. Furthermore, the effect of organic contaminants on the photocathodic protection mechanism and the oxidation of glucose during this process were explored.