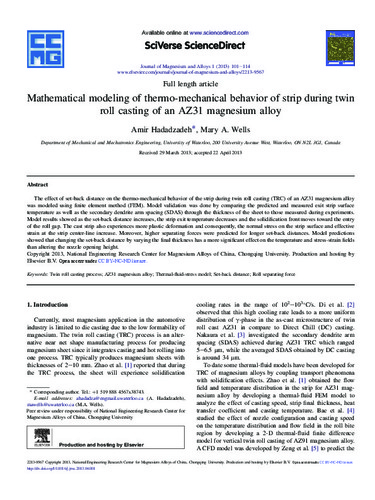 The effect of set-back distance on the thermo-mechanical behavior of the strip during twin roll casting (TRC) of an AZ31 magnesium alloy was modeled using finite element method (FEM). Model validation was done by comparing the predicted and measured exit strip surface temperature as well as the secondary dendrite arm spacing (SDAS) through the thickness of the sheet to those measured during experiments. Model results showed as the set-back distance increases, the strip exit temperature decreases and the solidification front moves toward the entry of the roll gap. The cast strip also experiences more plastic deformation and consequently, the normal stress on the strip surface and effective strain at the strip center-line increase. Moreover, higher separating forces were predicted for longer set-back distances. Model predictions showed that changing the set-back distance by varying the final thickness has a more significant effect on the temperature and stress-strain fields than altering the nozzle opening height.