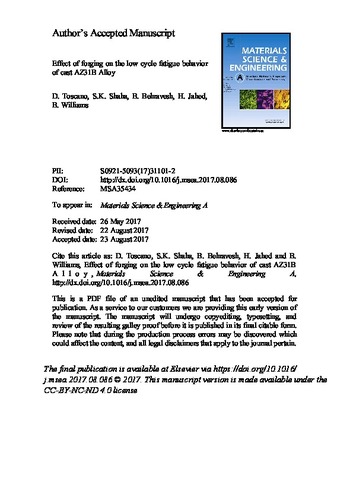 The effect of forging on the low cycle fatigue (LCF) behavior of cast AZ31B was investigated. The forging process was conducted at a temperature of 450°C and speed of 390mm/min. Fully reversed (Rε=-1) strain controlled cyclic tests were performed on as-cast and forged materials under total strain amplitudes of 0.1%-1.2%. Forging eliminated the dendritic morphology and reduced β-phase intermetallics observed in the cast alloy. Additionally sharp basal texture and bimodal grain structure were developed. Generally, the forged material was found to exhibit longer fatigue life, especially at lower strain amplitudes. This was attributed to the grain refinement and the developed basal texture that changed the alloy’s deformation behavior. Also, the forged material achieved significantly higher stresses at the same total strain amplitudes compared to cast AZ31B, and substantial cyclic hardening occurred during cyclic loading. At the same time, considerable tension-compression asymmetry was observed in the forged AZ31B during LCF testing. The Smith-Watson-Topper model and Jahed-Varvani energy model were employed and both models were found to accurately predict the experimentally obtained fatigue life of both alloy conditions. The Jahed-Varvani model accurately predicted fatigue life within a factor of 1.5 especially for the asymmetric behavior of forged AZ31B.