Monotonic and cyclic behaviour of cast and cast-forged AZ80 Mg 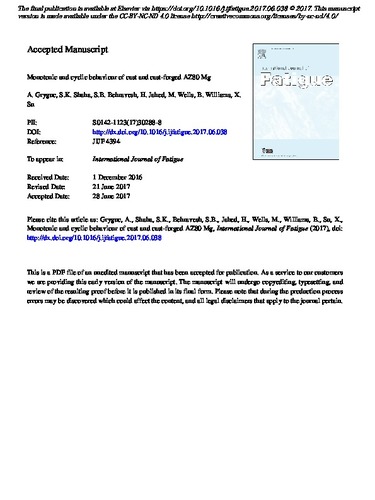 Tensile and strain-controlled fatigue tests were performed to investigate the influence of forging on the performance of cast AZ80 magnesium alloy. The obtained microstructural analysis showed that the as-cast AZ80 magnesium alloy has dendritic α-Mg phase with eutectic Mg17Al12 morphology and a random texture. In contrast, the forged samples showed refined grains and a strong basal texture. During tensile testing, a maximum yield and ultimate tensile strength of 182 MPa and 312 MPa were obtained for the forged samples, representing increases of 121% and 33%, respectively, from the as-cast condition. At the same time, a significant improvement (73%) in ductility was obtained in forged samples. It was also observed that the forged samples achieved comparatively longer fatigue life under strain-controlled cyclic loading. Analysis of the fracture surfaces showed that a cleavage-type morphology was typical for the as-cast samples, while the occurrence of dimples and other evidence of plastic deformation were identified in the fracture surfaces of the forged specimens, indicating a more ductile response. Forging caused grain refinement and texture modification, both of which enhance alloy performance by improving strength and ductility, and leading to longer fatigue life. Strain and energy-based models were investigated for their suitability to predict the life of the forged material. Both the Smith-Watson Topper and the Jahed-Varvani energy-based models gave reliable life prediction.