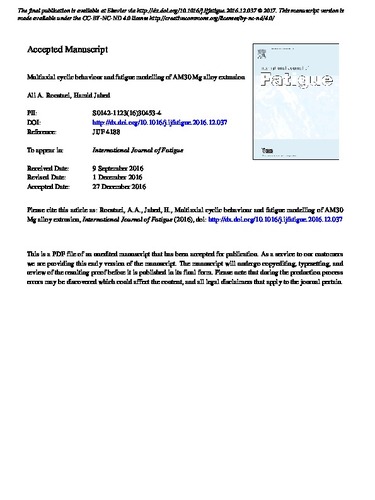 Multiaxial fatigue characteristics of AM30 Mg alloy extrusion are studied through fully-reversed strain controlled cyclic experiments including pure torsional and combined axial-torsional at 0, 45 and 90 phase angle shifts. Under pure torsional cyclic loading, AM30 extrusion is realized to exhibit better fatigue properties than AZ31B and AZ61A extrusions, especially in low-cycle fatigue regime. Under proportional axial-torsional cyclic loading, twinning/de-twinning in axial mode results in asymmetric shear hysteresis loop. The effect of non-proportionality of biaxial loading on various aspects of material response is also examined and observed to be depending on the magnitude of axial strain amplitude. Finally, the life prediction capabilities of two critical plane models, i.e., modified Smith-Watson-Topper (SWT) and Fatemi-Socie (FS), as well as Jahed-Varvani (JV) energy-based approach are assessed, employing fatigue life data of AM30 extrusion. Correlation data between experimental and estimated lives are found to lie within narrow scatter band.