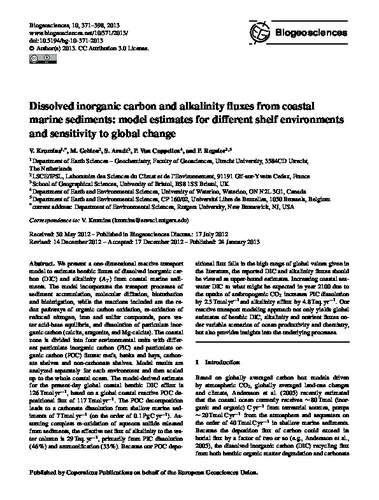 We present a one-dimensional reactive transport model to estimate benthic fluxes of dissolved inorganic carbon (DIC) and alkalinity (AT) from coastal marine sediments. The model incorporates the transport processes of sediment accumulation, molecular diffusion, bioturbation and bioirrigation, while the reactions included are the redox pathways of organic carbon oxidation, re-oxidation of reduced nitrogen, iron and sulfur compounds, pore water acid-base equilibria, and dissolution of particulate inorganic carbon (calcite, aragonite, and Mg-calcite). The coastal zone is divided into four environmental units with different particulate inorganic carbon (PIC) and particulate organic carbon (POC) fluxes: reefs, banks and bays, carbonate shelves and non-carbonate shelves. Model results are analyzed separately for each environment and then scaled up to the whole coastal ocean. The model-derived estimate for the present-day global coastal benthic DIC efflux is 126 Tmol yr(-1), based on a global coastal reactive POC depositional flux of 117 Tmol yr(-1). The POC decomposition leads to a carbonate dissolution from shallow marine sediments of 7 Tmol yr(-1) (on the order of 0.1 Pg C yr(-1)). Assuming complete re-oxidation of aqueous sulfide released from sediments, the effective net flux of alkalinity to the water column is 29 Teq. yr(-1), primarily from PIC dissolution (46 %) and ammonification (33 %). Because our POC depositional flux falls in the high range of global values given in the literature, the reported DIC and alkalinity fluxes should be viewed as upper-bound estimates. Increasing coastal seawater DIC to what might be expected in year 2100 due to the uptake of anthropogenic CO2 increases PIC dissolution by 2.3 Tmol yr(-1) and alkalinity efflux by 4.8 Teq. yr(-1). Our reactive transport modeling approach not only yields global estimates of benthic DIC, alkalinity and nutrient fluxes under variable scenarios of ocean productivity and chemistry, but also provides insights into the underlying processes.