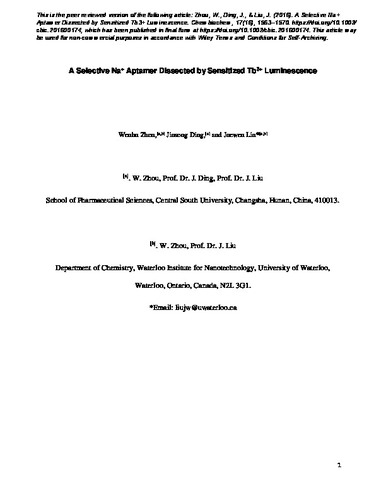 A previous study of two RNA-cleaving DNAzymes, NaA43 and Ce13d, revealed the possibility of a common Na+ aptamer motif. Because Na+ binding to DNA is a fundamental biochemical problem, the interaction between Ce13d and Na+ was studied in detail by using sensitized Tb3+ luminescence spectroscopy. Na+ displaces Tb3+ from the DNAzyme, and thus quenches the emission from Tb3+. The overall requirement for Na+ binding includes the hairpin and the highly conserved 16-nucleotide loop in the enzyme strand, along with a few unpaired nucleotides in the substrate. Mutation studies indicate good correlation between Na+ binding and cleavage activity, thus suggesting a critical role of Na+ binding for the enzyme activity. Ce13d displayed a K-d of approximate to 20mm with Na+ (other monovalent cations: 40-60mm). The K-d values for other metal ions are mainly due to non-specific competition. With a single nucleotide mutation, the specific Na+ binding was lost. Another mutant improved K-d to 8mm with Na+. This study has demonstrated a Na+ aptamer with important biological implications and analytical applications. It has also defined the structural requirements for Na+ binding and produced an improved mutant.