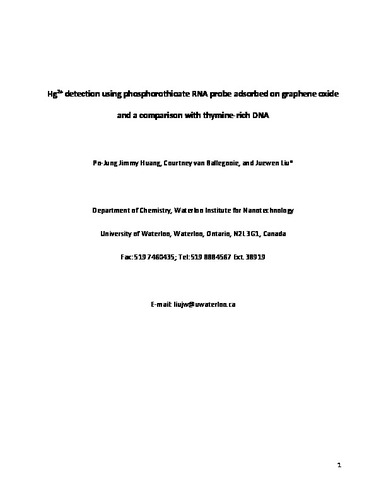 Mercury is a highly toxic heavy metal and many DNA-based biosensors have been recently developed for Hg2+ detection in water. Among them, thymine-rich DNA is the most commonly used for designing Hg2+ sensors. However, the thymine-Hg2+ interaction is strongly affected by the buffer conditions. We recently reported a molecular beacon containing phosphorothioate (PS)-modified RNA linkages that can be cleaved by Hg2+. In this work, the fluorescence quenching and DNA adsorption properties of nano-sized graphene oxide (NGO) were used to develop a new sensor using the PS-RNA chemistry. Three DNA probes, containing one, three and five PS-RNA linkages, respectively, were tested. Finally, a fluorophore-labeled poly-A DNA with five PS-RNA linkages was selected and adsorbed by NGO. In the presence of Hg2+, the fluorophore was released from NGO due to the cleavage reaction, resulting in a fluorescence enhancement. This sensor is highly selective for Hg2+ with a detection limit of 8.5 nM Hg2+. For comparison, a fluorophore-labeled poly-T DNA was also tested, which responded to Hg2+ more slowly and was inhibited by high NaCl concentrations, while the PS-RNA probe was more tolerant to different buffer conditions. This work indicates a new method for interfacing DNA with NGO for Hg2+ detection.