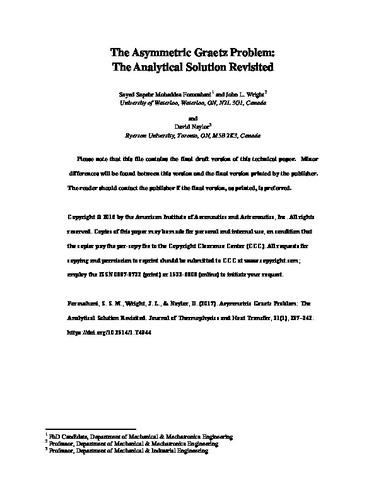 Forced-convective heat transfer from the walls of an asymmetrically heated channel to the fluid passing through in a laminar, hydrodynamically developed flow is known as the asymmetric Graetz problem. Several analytical and numerical solutions for this problem have been published, and many variations and extensions have been investigated. Recently, there has been a renewed interest in this problem due to its applications in emerging areas such as microchannels and fuel cells. In the present work, the asymmetric Graetz problem is examined in a resistor-network framework. The formulation of the problem in terms of three convective resistances forming a delta network leads to temperature-independent Nusselt numbers that are free of the singularities found in previous results. The proposed approach also offers new information regarding the split of heat transfer between the channel walls and the flow. This work is part of an ongoing project on resistor-network modeling and characterization of multitemperature convection problems.