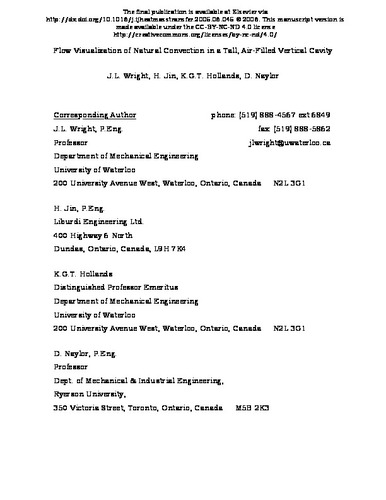 Natural convection of air in a tall vertical cavity was studied using a smoke patterns and interferometry. Experiments covered Rayleigh numbers of 4850 < Ra < 54,800 and aspect ratio A ≈ 40. Secondary cells were noted at Ra as low as 6228. The flow was stable at Ra < 104. As Ra exceeded 104 the flow became irregular, the core flow became increasingly unsteady and 3-D motion became evident. Interferometry showed that most of the temperature drop exists in boundary layers near the walls. The core is well mixed and of relatively uniform temperature with little or no vertical stratification.