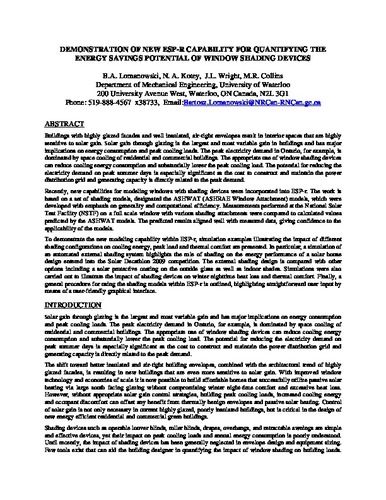 Buildings with highly glazed facades and well insulated, air-tight envelopes result in interior spaces that are highly sensitive to solar gain. Solar gain through glazing is the largest and most variable gain in buildings and has major implications on energy consumption and peak cooling loads. The peak electricity demand in Ontario, for example, is dominated by space cooling of residential and commercial buildings. The appropriate use of window shading devices can reduce cooling energy consumption and substantially lower the peak cooling load. The potential for reducing the electricity demand on peak summer days is especially significant as the cost to construct and maintain the power distribution grid and generating capacity is directly related to the peak demand. Recently, new capabilities for modeling windows with shading devices were incorporated into ESP-r. The work is based on a set of shading models, designated the ASHWAT (ASHRAE Window Attachment) models, which were developed with emphasis on generality and computational efficiency. Measurements performed at the National Solar Test Facility (NSTF) on a full scale window with various shading attachments were compared to calculated values predicted by the ASHWAT models. The predicted results aligned well with measured data, giving confidence to the applicability of the models. To demonstrate the new modeling capability within ESP-r, simulation examples illustrating the impact of different shading configurations on cooling energy, peak load and thermal comfort are presented. In particular, a simulation of an automated external shading system highlights the role of shading on the energy performance of a solar house design entered into the Solar Decathlon 2009 competition. The external shading design is compared with other options including a solar protective coating on the outside glass as well as indoor shades. Simulations were also carried out to illustrate the impact of shading devices on winter nighttime heat loss and thermal comfort. Finally, a general procedure for using the shading models within ESP-r is outlined, highlighting straightforward user input by means of a user-friendly graphical interface.