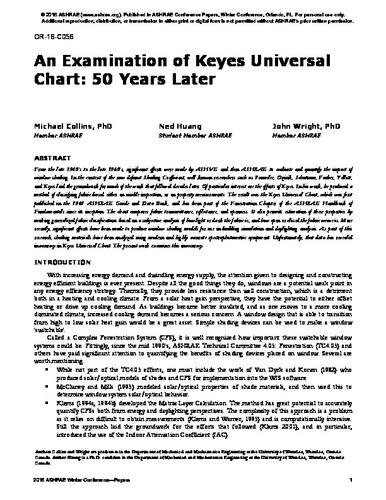 From the late 1940's to the late 1960's, significant efforts were made by ASHVE and then ASHRAE to evaluate and quantify the impact of window shading. In the context of the now defunct Shading Coefficient, well known researchers such as Parmelee, Ozisik, Schutrum, Farber, Yellott, and Keyes laid the groundwork for much of the work that followed decades later. Of particular interest are the efforts of Keyes. In his work, he produced a method of classifying fabric based either on visible inspection, or on property measurements. The result was the Keyes Universal Chart, which was first published in the 1965 ASHRAE Guide and Data Book, and has been part of the Fenestration Chapter of the ASHRAE Handbook of Fundamentals since its inception. The chart compares fabric transmittance, reflectance, and openness. It also permits estimation of these properties by making generalized fabric classifications based on a subjective analysis of how light or dark the fabric is, and how open or closed the fabric weave is. More recently, significant efforts have been made to produce window shading models for use in building simulation and daylighting analysis. As part of this research, shading materials have been analyzed using modern and highly accurate spectrophotometric equipment. Unfortunately, that data has revealed inaccuracy in Keyes Universal Chart. The present work examines this inaccuracy.