Laminar Free Convection from a Pair of Horizontal Cylinders: A Three-Temperature Problem 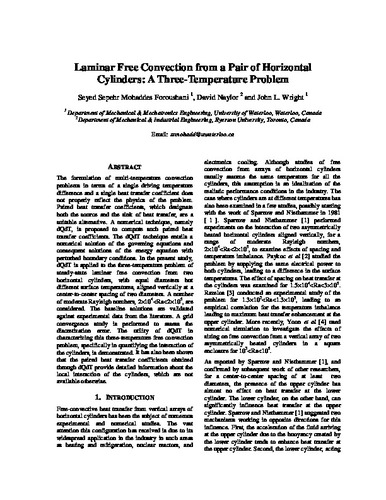 The formulation of multi-temperature convection problems in terms of a single driving temperature difference and a single heat transfer coefficient does not properly reflect the physics of the problem. Paired heat transfer coefficients, which designate both the source and the sink of heat transfer, are a suitable alternative. A numerical technique, namely dQdT, is proposed to compute such paired heat transfer coefficients. The dQdT technique entails a numerical solution of the governing equations and consequent solutions of the energy equation with perturbed boundary conditions. In the present study, dQdT is applied to the three-temperature problem of steady-state laminar free convection from two horizontal cylinders, with equal diameters but different surface temperatures, aligned vertically at a center-to-center spacing of two diameters. A number of moderate Rayleigh numbers, 2×104<Ra<2×105, are considered. The baseline solutions are validated against experimental data from the literature. A grid convergence study is performed to assess the discretization error. The utility of dQdT in characterizing this three-temperature free convection problem, specifically in quantifying the interaction of the cylinders, is demonstrated. It has also been shown that the paired heat transfer coefficients obtained through dQdT provide detailed information about the local interaction of the cylinders, which are not available otherwise.