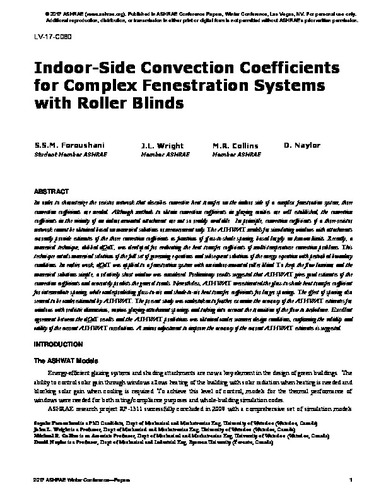 In order to characterize the resistor network that describes convective heat transfer on the indoor side of a complex fenestration system, three convection coefficients are needed. Although methods to obtain convection coefficients in glazing cavities are well established, the convection coefficients in the vicinity of an indoor-mounted attachment are not so readily available. In principle, convection coefficients of a three-resistor network cannot be obtained based on numerical solutions or measurement only. The ASHWAT models for simulating windows with attachments currently provide estimates of the three convection coefficients as functions of glass-to-shade spacing, based largely on known limits. Recently, a numerical technique, dubbed dQdT, was developed for evaluating the heat transfer coefficients of multi-temperature convection problems. This technique entails numerical solutions of the full set of governing equations and subsequent solutions of the energy equation with perturbed boundary conditions. In earlier work, dQdT was applied to a fenestration system with an indoor-mounted roller blind. To keep the flow laminar and the numerical solutions simple, a relatively short window was considered. Preliminary results suggested that ASHWAT gives good estimates of the convection coefficients and accurately predicts the general trends. Nevertheless, ASHWAT overestimated the glass-to-shade heat transfer coefficient for intermediate spacing, while underpredicting glass-to-air and shade-to-air heat transfer coefficients for larger spacings. The effect of spacing also seemed to be underestimated by ASHWAT. The present study was undertaken to further examine the accuracy of the ASHWAT estimates for windows with realistic dimensions, various glazing-attachment spacings and taking into account the transition of the flow to turbulence. Excellent agreement between the dQdT results and the ASHWAT predictions was obtained under summer design conditions, confirming the validity and utility of the current ASHWAT correlations. A minor adjustment to improve the accuracy of the current ASHWAT estimates is suggested.