Solar Gain through Windows with Shading Devices: Simulation Versus Measurement 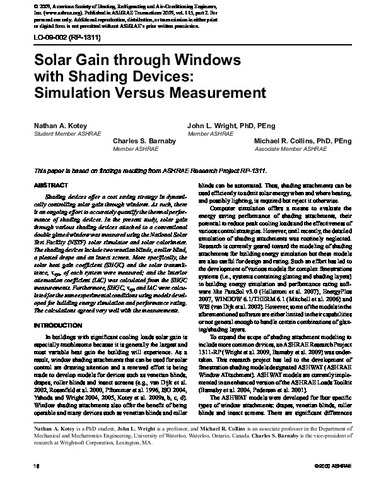 Shading devices offer a cost saving strategy in dynamically controlling solar gain through windows. As such, there is an ongoing effort to accurately quantify the thermal performance of shading devices. In the present study, solar gain through various shading devices attached to a conventional double glazed window was measured using the National Solar Test Facility (NSTF) solar simulator and solar calorimeter. The shading devices include two venetian blinds, a roller blind, a pleated drape and an insect screen. More specifically, the solar heat gain coefficient (SHGC) and the solar transmittance, tsys, of each system were measured; and the interior attenuation coefficient (IAC) was calculated from the SHGC measurements. Furthermore, SHGC, tsys and IAC were calculated for the same experimental conditions using models developed for building energy simulation and performance rating. The calculations agreed very well with the measurements.