Calculating Center-Glass Performance Indices of Windows with a Diathermanous Layer 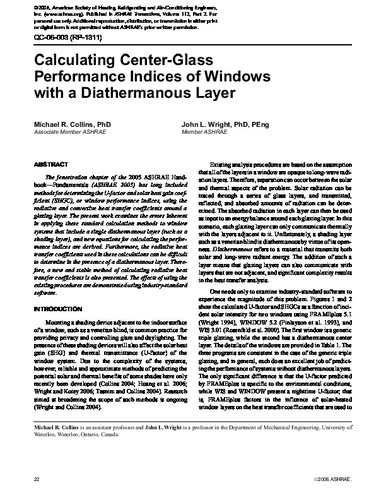 The fenestration chapter of the 2005 ASHRAE Hand-book—Fundamentals (ASHRAE 2005) has long included methods for determining the U-factor and solar heat gain coef-ficient (SHGC), or window performance indices, using the radiative and convective heat transfer coefficients around a glazing layer. The present work examines the errors inherent in applying these standard calculation methods to window systems that include a single diathermanous layer (such as a shading layer), and new equations for calculating the perfor-mance indices are derived. Furthermore, the radiative heat transfer coefficients used in these calculations can be difficult to determine in the presence of a diathermanous layer. There-fore, a new and stable method of calculating radiative heat transfer coefficients is also presented. The effects of using the existing procedures are demonstrated using industry-standard software.