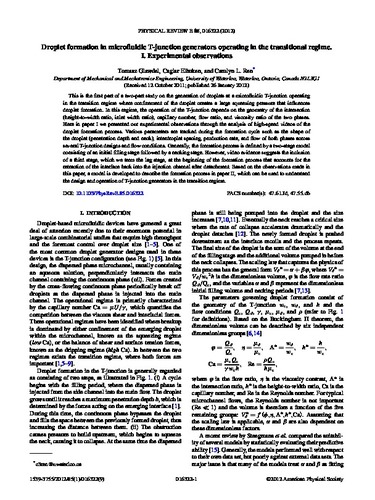 This is the first part of a two-part study on the generation of droplets at a microfluidic T-junction operating in the transition regime where confinement of the droplet creates a large squeezing pressure that influences droplet formation. In this regime, the operation of the T-junction depends on the geometry of the intersection (height-to-width ratio, inlet width ratio), capillary number, flow ratio, and viscosity ratio of the two phases. Here in paper I we presented our experimental observations through the analysis of high-speed videos of the droplet formation process. Various parameters are tracked during the formation cycle such as the shape of the droplet (penetration depth and neck), interdroplet spacing, production rate, and flow of both phases across several T-junction designs and flow conditions. Generally, the formation process is defined by a two-stage model consisting of an initial filling stage followed by a necking stage. However, video evidence suggests the inclusion of a third stage, which we term the lag stage, at the beginning of the formation process that accounts for the retraction of the interface back into the injection channel after detachment. Based on the observations made in this paper, a model is developed to describe the formation process in paper II, which can be used to understand the design and operation of T-junction generators in the transition regime.