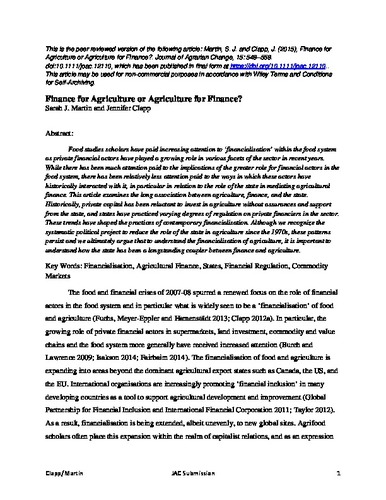 Food studies scholars have paid increasing attention to ‘financialization’ within the food system as private financial actors have played a growing role in various facets of the sector in recent years. While there has been much attention paid to the implications of the greater role for financial actors in the food system, there has been relatively less attention paid to the ways in which these actors have historically interacted with it; in particular, in relation to the role of the state in mediating agricultural finance. This paper examines the long association between agriculture, finance and the state. Historically, private capital has been reluctant to invest in agriculture without assurances and support from the state, and states have practiced varying degrees of regulation on private financiers in the sector. These trends have shaped the practices of contemporary financialization. Although we recognize the systematic political project to reduce the role of the state in agriculture since the 1970s, these patterns persist and we ultimately argue that to understand the financialization of agriculture, it is important to understand how the state has been a long-standing coupler between finance and agriculture.