Food security and food sovereignty: Getting past the binary 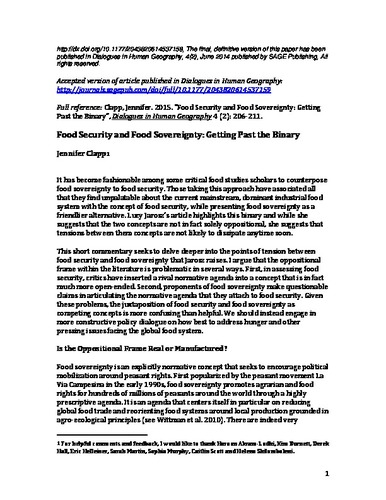 The terms food security and food sovereignty originally emerged as separate terms to describe different things. The former is a concept that describes a condition regarding access to adequate food, while the latter is more explicitly a political agenda for how to address inadequate access to food and land rights. Over the past decade, the critical food studies literature has increasingly referred to these terms as being oppositional to each rather than relational to one another. This commentary reflects on the emergence and rationale behind this binary and argues that the current oppositional frame within the literature is problematic in several ways. First, critics of food security have inserted a rival normative agenda into what was originally a much more open-ended concept. Second, the grounds on which that normative agenda is assigned to food security are shaky on several points. Given these problems, the commentary argues that the juxtaposition of food security and food sovereignty as competing terms is in many ways more confusing than helpful to policy dialogue on questions of hunger and the global food system.