Fatigue related impairments in oculomotor control are prevented by caffeine 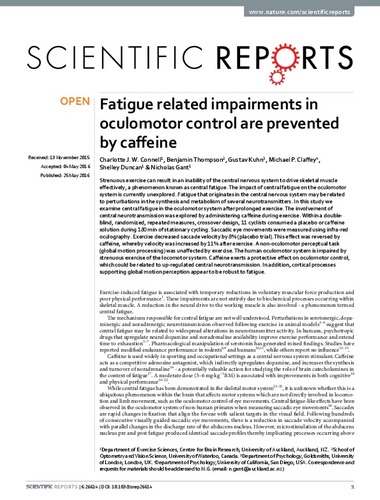 Strenuous exercise can result in an inability of the central nervous system to drive skeletal muscle effectively, a phenomenon known as central fatigue. The impact of central fatigue on the oculomotor system is currently unexplored. Fatigue that originates in the central nervous system may be related to perturbations in the synthesis and metabolism of several neurotransmitters. In this study we examine central fatigue in the oculomotor system after prolonged exercise. The involvement of central neurotransmission was explored by administering caffeine during exercise. Within a double-blind, randomized, repeated measures, crossover design, 11 cyclists consumed a placebo or caffeine solution during 180 min of stationary cycling. Saccadic eye movements were measured using infra-red oculography. Exercise decreased saccade velocity by 8% (placebo trial). This effect was reversed by caffeine, whereby velocity was increased by 11% after exercise. A non-oculomotor perceptual task (global motion processing) was unaffected by exercise. The human oculomotor system is impaired by strenuous exercise of the locomotor system. Caffeine exerts a protective effect on oculomotor control, which could be related to up-regulated central neurotransmission. In addition, cortical processes supporting global motion perception appear to be robust to fatigue.