Food self-sufficiency: Making sense of it, and when it makes sense 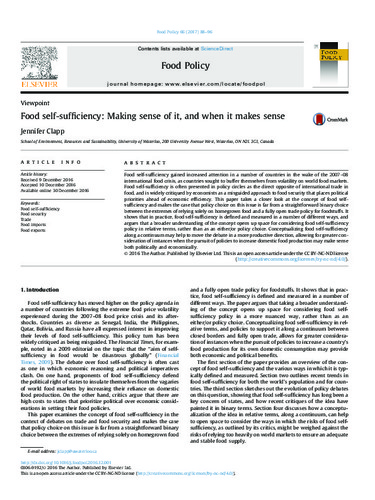 Food self-sufficiency gained increased attention in a number of countries in the wake of the 2007–08 international food crisis, as countries sought to buffer themselves from volatility on world food markets. Food self-sufficiency is often presented in policy circles as the direct opposite of international trade in food, and is widely critiqued by economists as a misguided approach to food security that places political priorities ahead of economic efficiency. This paper takes a closer look at the concept of food self-sufficiency and makes the case that policy choice on this issue is far from a straightforward binary choice between the extremes of relying solely on homegrown food and a fully open trade policy for foodstuffs. It shows that in practice, food self-sufficiency is defined and measured in a number of different ways, and argues that a broader understanding of the concept opens up space for considering food self-sufficiency policy in relative terms, rather than as an either/or policy choice. Conceptualizing food self-sufficiency along a continuum may help to move the debate in a more productive direction, allowing for greater consideration of instances when the pursuit of policies to increase domestic food production may make sense both politically and economically.