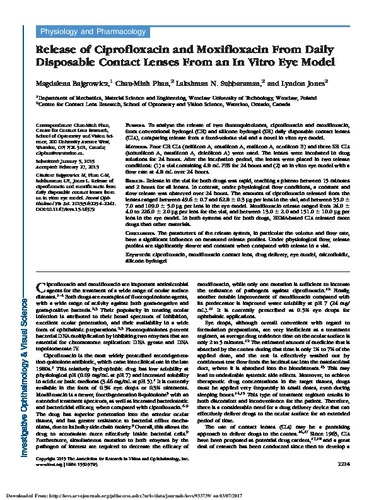 Purpose.: To analyze the release of two fluoroquinolones, ciprofloxacin and moxifloxacin, from conventional hydrogel (CH) and silicone hydrogel (SH) daily disposable contact lenses (CLs), comparing release from a fixed-volume vial and a novel in vitro eye model. Methods.: Four CH CLs (nelfilcon A, omafilcon A, etafilcon A, ocufilcon B) and three SH CLs (somofilcon A, narafilcon A, delefilcon A) were used. The lenses were incubated in drug solutions for 24 hours. After the incubation period, the lenses were placed in two release conditions: (1) a vial containing 4.8 mL PBS for 24 hours and (2) an in vitro eye model with a flow rate at 4.8 mL over 24 hours. Results.: Release in the vial for both drugs was rapid, reaching a plateau between 15 minutes and 2 hours for all lenses. In contrast, under physiological flow conditions, a constant and slow release was observed over 24 hours. The amounts of ciprofloxacin released from the lenses ranged between 49.6 ± 0.7 and 62.8 ± 0.3 μg per lens in the vial, and between 35.0 ± 7.0 and 109.0 ± 5.0 μg per lens in the eye model. Moxifloxacin release ranged from 24.0 ± 4.0 to 226.0 ± 2.0 μg per lens for the vial, and between 13.0 ± 2.0 and 151.0 ± 10.0 μg per lens in the eye model. In both systems and for both drugs, HEMA-based CLs released more drugs than other materials. Conclusions.: The parameters of the release system, in particular the volume and flow rate, have a significant influence on measured release profiles. Under physiological flow, release profiles are significantly slower and constant when compared with release in a vial.