Time Course of Dichoptic Masking in Normals and Suppression in Amblyopes 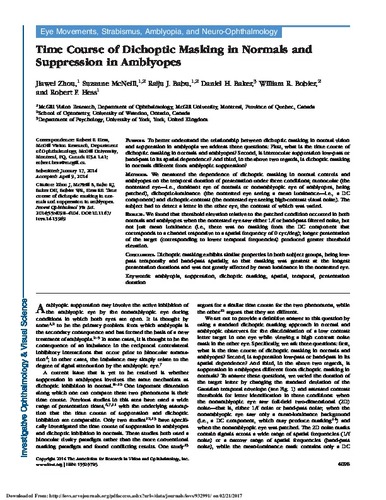 Purpose.: To better understand the relationship between dichoptic masking in normal vision and suppression in amblyopia we address three questions: First, what is the time course of dichoptic masking in normals and amblyopes? Second, is interocular suppression low-pass or band-pass in its spatial dependence? And third, in the above two regards, is dichoptic masking in normals different from amblyopic suppression? Methods.: We measured the dependence of dichoptic masking in normal controls and amblyopes on the temporal duration of presentation under three conditions; monocular (the nontested eye—i.e., dominant eye of normals or nonamblyopic eye of amblyopes, being patched), dichoptic-luminance (the nontested eye seeing a mean luminance—i.e., a DC component) and dichoptic-contrast (the nontested eye seeing high-contrast visual noise). The subject had to detect a letter in the other eye, the contrast of which was varied. Results.: We found that threshold elevation relative to the patched condition occurred in both normals and amblyopes when the nontested eye saw either 1/f or band-pass filtered noise, but not just mean luminance (i.e., there was no masking from the DC component that corresponds to a channel responsive to a spatial frequency of 0 cyc/deg); longer presentation of the target (corresponding to lower temporal frequencies) produced greater threshold elevation. Conclusions.: Dichoptic masking exhibits similar properties in both subject groups, being low-pass temporally and band-pass spatially, so that masking was greatest at the longest presentation durations and was not greatly affected by mean luminance in the nontested eye.