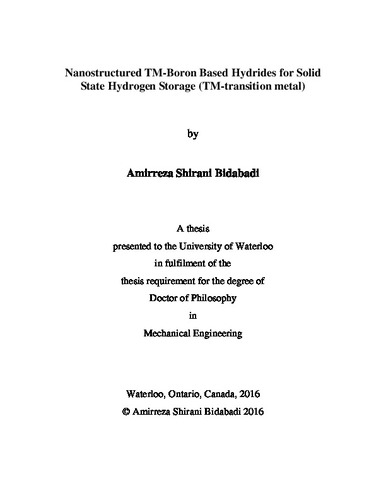 Several complex borohydride systems were investigated in this work as potential candidates for on-demand hydrogen generation and/or storage. All selected systems were synthesized by ball milling (BM) in expectation of inducing mechano-chemical activation synthesis (MCAS). The (LiBH4-FeCl2) system with the molar ratio of 2:1 showed rapid hydrogen generation (mechanical dehydrogenation) at room temperature. Rapid mechanical dehydrogenation was also observed during milling of LiBH4 with TiCl2 and TiCl3 with the molar ratio of 2:1 and 3:1, respectively. The Li-B-Fe/Ti-H systems are quite remarkable since their mechanical dehydrogenation rate at ambient temperature is much higher than their thermal dehydrogenation rate within the 100-250°C range. Mechanical dehydrogenation of the (3LiBH4-TiF3) system was rather slow without and with additives such as ultrafine filamentary Ni and graphene. Only minimal mechanical dehydrogenation was observed for the (LiBH4-MnCl2) system. Some additives such as ultrafine filamentary Ni and LiNH2 accelerated the mechanical dehydrogenation rate of this system. The Mn(BH4)2 and LiCl, which were identified as the MCAS products after ball milling of (LiBH4-MnCl2), are both nanocrystalline after synthesis. The Mn(BH4)2-LiCl nanocomposite was capable of desorbing up to ~ 4.5 wt.% at 100°C during isothermal dehydrogenation and was very stable and released no H2 during long-term storage at room temperature for over 120 days. Mass spectrometry (MS) of the ball milled (LiBH4-MnCl2) showed the principal peaks of H2 accompanied by a miniscule peak of B2H6 (diborane gas). Adding 5 wt.% of LiNH2, graphene and Ni to the powder mixture during mechano-chemical synthesis increased the H2/B2H6 peak ratio, consequently minimizing the release of B2H6 during isothermal dehydrogenation. LiNH2 and Ni suppressed the release of B2H6 to a larger extent than graphene. Isothermal desorption of ball milled (3LiBH4-TiF3) occurred at a very low temperature of 60°C resulting in desorption of 4.52 wt.% H2 within 93 h. Interestingly, increasing milling energy from QTR=72.8 kJ/g (1 h BM) to QTR=364 kJ/g (5 h BM) led to a nearly complete disappearance of the MS B2H6 peak.