Design, Fabrication, and Testing of a Dielectric Elastomer based Ambulatory Active Compression Device 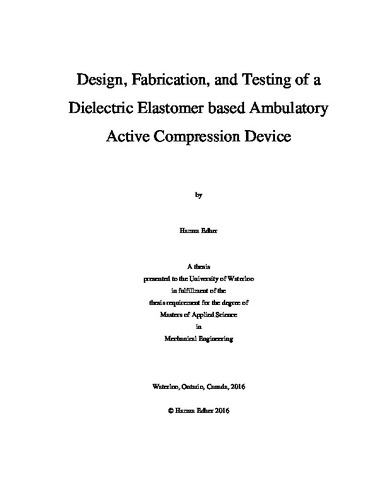 Various vascular disorders such as deep vein thrombosis and edema have been associated with the pooling of venous blood in the lower limbs due to extended periods of immobility. Prophylaxis against peripheral vascular diseases in the lower limbs commonly involves the utilization of external compression, in particular pneumatic active compression (PAC). Although effective, PAC systems require the use of an air compressor and flow system, and are therefore unsuitable for ambulatory use. In this research, a novel design for a dielectric elastomer (DE) based active compression device design is presented, fabricated, and experimentally validated. The system comprises of a belt mechanism connected in conjunction with a DE actuator. The belt mechanism is utilized in order to overcome an intrinsic shortcoming of DE actuators and in turn allow active compression to be applied directly with voltage application. In doing so, the presented design reduces the period during which the actuator is charged thus improving system lifetime and power efficiency. Analytical models characterizing the operation of the belt mechanisms are formulated and validated experimentally with less than 7% error. Both static and dynamic testing is conducted in order to characterize the effectiveness of the active compression device. It is determined that the actuation output amplitudes are reduced when actuating cyclically. To combat this, a novel method of dynamically charging DE actuators through manipulating the input signal shape, termed the hold method, is introduced. It is shown that through implementing the hold time method cyclic actuation output can be increased by 24% with insignificant change in the desired actuation output curve shape. The optimized hold time parameters obtained through cyclic DE force and strain testing are utilized for active compression testing and a physiologically beneficial pressure gradient of 10 mmHg is achieved. A regenerative powering circuit and control system utilized to charge two capacitive elements sequentially by transferring charge from one component to the other is introduced. This circuit aims to increase the energy efficiency of the system and provides potential to be utilized in an active compression system where more than one active element is present. Preliminary testing is conducted on the circuit and the associated timing control system and it is shown to operate effectively for capacitive elements with low resistances, reducing the energy requirements to charge the second component by up to 25%.