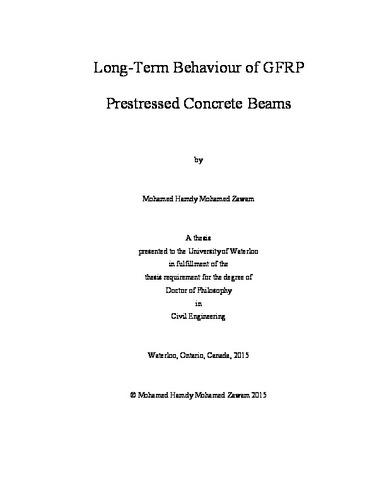 During the last two decades, fibre-reinforced polymer (FRP) composites have emerged as prom-ising materials that can be used in lieu of steel for reinforcing concrete structures due to their corrosion-resistant properties, their high tensile strength, and their high stiffness to weight ratio. FRPs have lower moduli of elasticity compared to steel which may lead to increased deflections and deformations of FRP reinforced structures unless section sizes are increased. To overcome this serviceability concern, FRP bars can be prestressed. Previous research has focused on the use of carbon and aramid fibre reinforced polymers (CFRPs and AFRPs) in prestressed concrete while less attention was given to glass fibre reinforced polymers (GFRPs) because they have high relaxation and are susceptible to creep rupture. As well, only very limited data on the long-term behaviour of GFRP prestressed concrete members under sustained and fatigue loads is available. Also, no design guidelines are provided by CAN/CSA-S806-12 or ACI 440.4R-04 for using prestressed GFRP bars in concrete members. This research study consisted of experimental and analytical phases, and was designed to assess the long-term properties of a concrete beams prestressed with a new generation of GFRP bars that are reported to have enhanced mechanical properties such that the bars are suitable for pre-stressed applications by overcoming the creep rupture and the relaxation problems (Weber and Baquero (2010). This study investigated the transfer length of the prestressed GFRP bars of diameters 12 mm and 16 mm in concrete. Most of the available research studied the transfer length of CFRP and AFRP tendons, and both CAN/CSA-S6-06 and ACI 440.1R-06 give equations for predicting the transfer length for these bar types only. The GFRP bars were prestressed to 40% of their ultimate capacity, which is more than the 25% pre-stressing limit at transfer that is set by CAN/CSA-S6-06 to avoid creep rupture. The effects of the prestressing level, the GFRP bar diameter and the concrete strength on the long-term behaviour of GFRP prestressed concrete were investigated. Twenty beams with dimensions of 150 x 255 x 3600 mm were cast and tested under different sustained load levels for 300 days. The long-term deflections, the concrete strains and the GFRP strains were monitored throughout the testing period. The main parameters considered were the diameter of the GFRP prestressing bars (12 mm and 16 mm), the prestressing level (0%, 25% and 40% of the ultimate strength), and the sustained load level (35%, 60%, and 80% of the ultimate capacity of the beam). Following the sustained loading phase, all beams were tested to failure in four- point bending. The transfer length measurements were taken for the prestressed beams, and data on the early relaxation of the GFRP bars was recorded for 277 hours. The experimental results showed that prestressing of GFRP bars significantly decreased the beams deflections, and the total and the concrete creep strains under service loading conditions. The results also showed that subjecting the beams to different levels of sustained loading for 300 days did not affect their ultimate capacity. It was concluded from the results that the increase in the GFRP strains in beams under sustained loading was mainly caused by the increase in the beam curvature due to creep and shrinkage of the concrete rather than the creep of the GFRP bars. The experimental measurements showed that the transfer length of 16 mm diameter GFRP bars in concrete with compressive strength of 30 MPa was about 17db (bar diameter), and 14db for prestressing levels of 40% and 25%, respectively. The analytical phase in this study involved developing an analytical model based on layer-by-layer strain compatibility analysis that was used to predict the short-term load-deflection behav-iour and the long-term deformations of GFRP prestressed concrete beams. A model based on layer-by-layer strain compatibility analysis was also proposed to predict the unloading behaviour of the GFRP reinforced/prestressed beams after being subjected to sustained loading. The pre-dicted load-deflections curves from the model were in good agreement with the experimental curves except for a discrepancy appears between the experimental and the predicted curves where the predicted load-deflection curve tends to flatten at the low load levels, which is more obvious in the prestressed beam. The transfer length results were used to improve the transfer length estimates provided by the ACI 440.4 R-04 equation by calibrating the material coefficient factor (αt) used in the ACI equation. A value of 2.6 in N-mm units is proposed for that coefficient to predict transfer length values for the GFRP bars used in this study.