THE USE OF SCIENCE IN ENVIRONMENTAL POLICY MAKING AND THE IMPLICATIONS FOR HEALTH: A CASE STUDY OF BISMUTH SHOTSHELLS 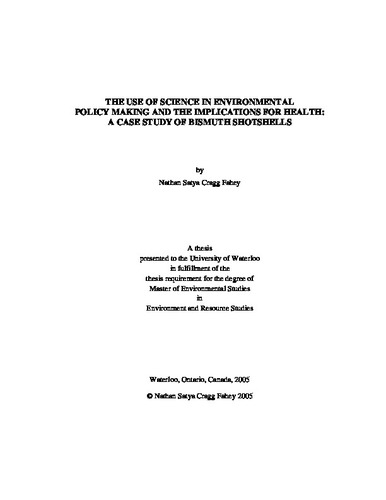 Scientific information is required to make environmental policy that will enhance and protect the health of ecosystems. The issues placed on the policy agenda come from the interactions amongst stakeholders, decision makers and other influential actors. These actors include government, civil society, private sector, and planning regimes. Ideally, scientific research then provides members of the policy community with assessed options upon which final decisions are eventually made. <br /><br /> This process is more complex than most in the realm of environmental policy because the goal of sustainability, commonly advocated by government, should serve to guide choices regarding policy alternatives. Sustainability, in practice, requires simultaneous attention to factors such as the needs of present and future generations; consideration for vastly differing social, environmental, and economic perspectives; and development of effective strategies to deal with the interconnectedness and complexity of the world. Management of these factors demands an ability to collect and process massive amounts of information at different temporal and spatial scales. The complexity of such situations means that there are instances when scientific information is not available and decisions need to be made quickly. <br /><br /> Using a case study approach, this thesis investigates the Canadian Wildlife Service?s attempts to achieve its mandate of conserving migratory birds while approving bismuth as an alternative to lead that was shown to cause poisoning of birds. This case study serves as an example of the tension between limited or ambiguous scientific information and urgent decisions. The chosen policy alternative to the use of lead shot was the approval of bismuth shot as a non-toxic substitute in 1997 and banning the use of lead shot nationwide in 1999. This decision to approve bismuth shot was based upon a few studies that were interpreted in a way that made it appear benign when compared to lead. This thesis examines the implications of this decision by conducting a comprehensive literature review of bismuth?s interactions with soil, vegetation, and animals, with some medical information on humans to put findings into an anthropocentric context. Also, analysis has been carried out on the results of a four-year study on bismuth in a wetland site near Kingston, Ontario, Canada. Finally, a ?post-normal perspective? exploration of the Canadian Wildlife Service revealed that decisions could be harmful to both human and environmental health if the values and knowledge of stakeholders are not taken into account and if uncertainties are overlooked. <br /><br /> Key findings generated by the literature review were potential chronic impacts to the neurological and reproductive health of animals exposed to bismuth shot. In turn, bismuth-contaminated meat may be a source of bismuth for humans and therefore guidelines for consumption should be investigated. Also, soil and vegetation have also been shown to accumulate bismuth, but it is unknown if it amounts to toxic levels. The wetland study helped to address the literature gap of bismuth?s fate in the environment. The mean concentration of bismuth in the soil after four years was 6. 40 µg/g, which was significantly higher than the control soil mean of 0. 42 µg/g. Ultimately, in terms of environmental policy, a ?post-normal perspective? offers three main tools for decision makers faced with urgent issues and uncertain facts. Namely, extended peer communities, acknowledgement and demonstration of uncertainty, and making values explicit.

Nathan Satya Cragg Fahey (2005). THE USE OF SCIENCE IN ENVIRONMENTAL POLICY MAKING AND THE IMPLICATIONS FOR HEALTH: A CASE STUDY OF BISMUTH SHOTSHELLS. UWSpace. http://hdl.handle.net/10012/995