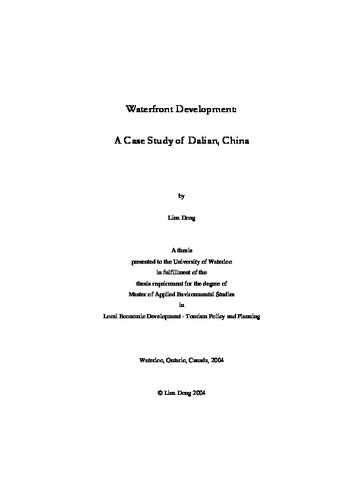 Waterfront development has been an issue of wide concern and extensive discussion since the 1970s. This study provides more insight into the phenomenon by applying the existing knowledge to a different political and economic context. A ?phased model? is proposed as a ?prototype? of waterfront development. It analyzes waterfront development as a series of five temporal stages, i. e. pre-start-up, start-up, early development, mega projects and maturity. Each of the phases is characterized by the involvement of specific stakeholders, issues and events, and outcomes. A trend in the input of stakeholders is discerned: Trends in the inputs of three stakeholders, the municipal government, the special purpose agencies and the private sector, are discerned whereby initial government investments are complemented and eventually exceeded by investments from the private sector. Analyses of three sites in Dalian?s (in Northeast China) waterfront development suggest that all three sites fit appropriately into the phase model. This suggests the applicability of western theory to cases elsewhere in a different political and economic context. The hypothesis on the evolutionary trend of stakeholders? inputs is tested, rendering generally confirmative results that: (1) the <b><i>municipal government?s</i></b> input followed a first increasing and then decreasing trend; (2) <b><i>special purpose agencies?</i></b> input intensity showed a rising pattern, exceeding that of the municipal government in later phases; (3) The <b><i>private sector</b></i> was seldom involved in waterfront development until the mega projects phase but their investments rose sharply after that. Finally, applying criteria for success gleaned from the literature, the overall evaluation of Dalian?s waterfront development can be viewed as being a success. However, the seasonality of tourism, the lifecycle of tourism products and the insufficient respect paid to local residents? interests are pointed out as possible deficiencies.