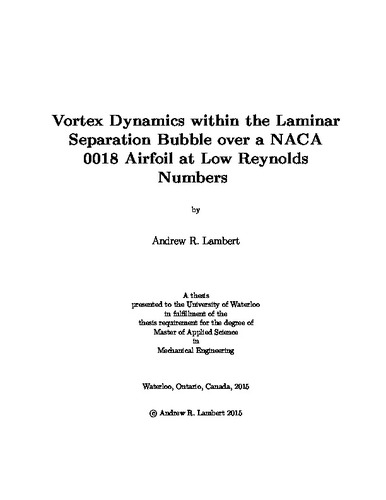 The structures formed in the separated shear layer within a Laminar Separation Bubble (LSB) over a NACA 0018 airfoil at a chord Reynolds number of 100,000 and Angles of Attack (AOA) of (5°, 8°, and 10°) were investigated. Techniques used during investigation include high-speed flow visualization synchronized with embedded microphones for pressure measurements. High-speed flow visualizations reveal the formation of coherent structures within the laminar separation bubble. These structures develop from disturbances that roll up into vortices, may merge, and then break down as the shear layer reattaches. Microphone measurements indicate that the growth of the structures are accompanied by growth in a band of frequencies in the fluctuating surface pressures. When simultaneous visualizations and microphone measurements were compared, it was found that a local pressure minimum indicates a vortex passing over a microphone. The merging of vortices was found to result in the merging of the associated pressure minima. To track vortices along the separation bubble, the microphone signals were cross-correlated around the minima. This tracking matches well with the reference tracking of vortices from images. The vortex dynamics at AOA = 5°, 8°, and 10° were also compared. Visualizations show that structures decrease in scale at higher angles of attack, and show greater temporal variations. The spectra of pressure fluctuations show higher-frequency activity related to the smaller scales at greater angles of attack. The vortices at all of these angles of attack develop to a peak downstream of mean transition where roll-up is complete. At reattachment although the vortices come closer to the surface, the magnitudes of the pressure fluctuations decrease as the vortices break down. Merging of vortices was also investigated using the vortex tracking technique based on surface pressure fluctuations. Merging was present at AOA = 5°, 8°, and 10°, but more prevalent at larger angles of attack. Merging occurs at a range of intervals of vortices, and does not follow a dominant frequency from the disturbance environment.