User Interface Design and Validation for the Automated Rehabilitation System 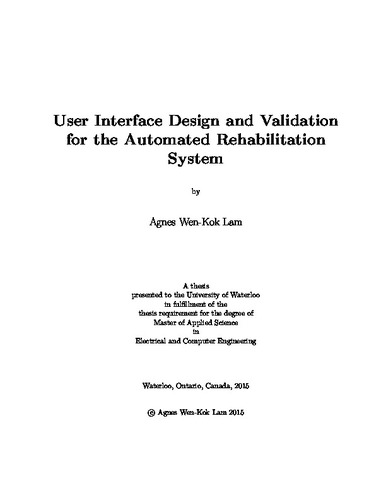 In current physical rehabilitation protocols, patients typically perform exercises with intermittent feedback or guidance following the initial demonstrations from the physiotherapist. Although many patient-centered systems have been developed for home rehabilitation, few systems have been developed to aid the physiotherapist as well as patients in the rehabilitation clinic. This thesis designs and validates the user interface of an Automated Rehabilitation System (ARS), tailored for both patients and therapists in the clinical setting. The ARS was designed using an iterative design process, developed with physiotherapists and patients in a knee and hip replacement clinic. ARS consists of body-worn inertial measurement units which are used to continuously estimate the patient's pose. The estimated pose is graphically represented as an animation and overlaid with the instructed motion on a visual display shown to the patient during exercise performance. ARS allows physiotherapists to quantitatively measure patient movement, assess recovery progress, and manage and schedule patient exercise regimens. For patients, ARS provides visual feedback and a novel exercise guidance feature to aid them while exercising. As an initial "proof of concept", two user studies were conducted with healthy participants to evaluate the usability of the visual guidance tool. Motion data was collected by the inertial measurement unit sensors and used to evaluate quality of motion, comparing user performance with and without visual feedback and with or without exercise guidance. The quantitative and qualitative results of the studies confirmed that performing the exercises with the visual guidance tool promotes more consistent exercise performance and proper technique with healthy participants. Following the user studies with healthy participants, system requirements and design requirements were derived through a focus group with 13 physiotherapists. The physiotherapists were presented with an early version of ARS and were asked to discuss how they envisioned the system could potentially be used in their current workflow and whether such a system could improve their current protocol. The physiotherapists provided comments on both the physiotherapist and patient interface of the system. The physiotherapists felt the physiotherapist interface would be useful for patient assessment and provided suggestions on how the data could be better displayed to fit their current workflow. The physiotherapists also felt the patient interface would be helpful for patients to learn the exercise motion, but they expressed concerns as to whether the patient population would be able to comprehend the guidance component of the patient interface. Following adaptations of the interface to incorporate physiotherapist feedback, the patient interface was evaluated in a user study with 26 outpatients in the clinical setting. Patients were asked to wear the inertial measurement unit sensors during their exercise session and were instructed to use the ARS interface for a subset of the exercises in their exercise regimen. At the end of the exercise session, patients were asked to complete questionnaires and participate in a semi-structured interview where the researchers asked the patients to discuss their experiences using ARS while exercising. The results show that performing the exercises with the visual guidance tool improves the quality of exercise performance and that patients had a positive experience exercising with ARS. Finally, a pilot study was conducted with two healthy participants to evaluate the effects of different forms of feedback on exercise performance. Participants were instructed to perform four different exercises and were shown a different feedback method for each exercise. The results of this pilot study showed that additional feedback from ARS may improve range of motion and increase consistency in exercise performance, and is worth further investigation in future work.