The Role of Concrete Models in the Revolution in Superconductivity 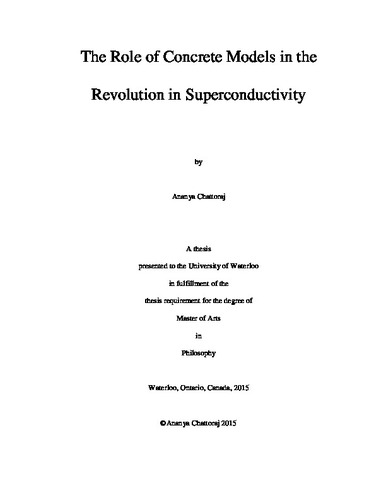 The distinction between the abstract and the concrete is useful in understanding the way in which theories relate to phenomenon, respectively, or vice versa. The connection between theory and the actual workings of scientific experiments can further be situated within scientific revolutions. This distinction has been considered in light of revolutions by Thomas Kuhn and via the concept of model use in science by Nancy Cartwright. Philosophers including Cartwright have argued that scientific models that focus on the phenomenon are important in scientific use. This argument has faced criticisms that argue of the temporariness of these types of models. Ultimately, in this thesis, I will show that the temporariness of concrete models is not a valid criticism due to the models’ role in problem solving in times of scientific revolution. To do so, I will first present the abstract-concrete distinction given by Cartwright, and Kuhn, I will then present a case study of the revolution in the development of models within superconductivity theory in order to trace the distinction between theories, the abstract level, and the phenomenon, the concrete level. The London-London model of superconductivity (a model created by Fritz and Heinz London to describe the expulsion of a magnetic field within a superconducting material) has previously been discussed in the abstract-concrete context by Cartwright, but BCS theory (named after the scientists who proposed it, John Bardeen, Leon Cooper, and John Robert Schrieffer to describe the low energy state of superconducting materials) has been largely absent in the same discussion context. I will use both, the London-London model and BCS theory, to argue that during times of scientific revolution, focus that was initially placed on an abstract level (theory) is moved to the concrete level (phenomenon) as a method of solving previously unsolvable problems. In discussing the London-London model, I will present Cartwright, Towfic Shomar, and Mauricio Suarez’ arguments for the London-London model being a phenomenological model. I will also present criticisms of this view with a particular focus on the notion that concretely developed models are temporary; I will argue that concrete models may be temporary, but they are necessary in resolving scientific crises. In this manner, I am extending Cartwright et. al.’s argument for the usefulness of non-theory-driven model construction. Finally, I will show the parallels in development of BCS theory with the London-London model, and present the resolution of the revolution in superconductivity with the connection of the concretely developed model and the abstract, quantum theory via BCS theory’s discovery of Cooper pairs (electrons that pair up in low temperatures).

Ananya Chattoraj (2015). The Role of Concrete Models in the Revolution in Superconductivity. UWSpace. http://hdl.handle.net/10012/9818