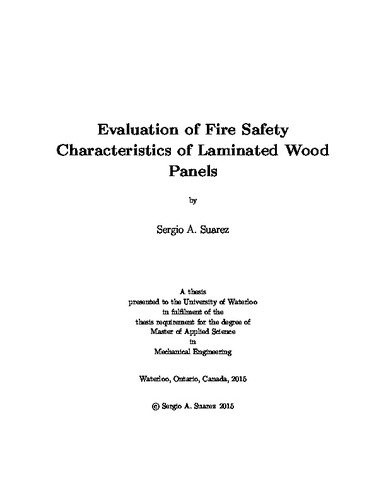 The goal of this study is to assess the fire performance of laminated wall panels comprised of medium density fibreboard (MDF) core sandwiched between two outer layers of a thin sheet Arborite laminates. Both fire retarded (FR) and non-fire-retarded (NFR) versions of each material were tested by themselves and also in various laminated combinations. In this research, the hypothesis is that the fire performance of each individual material will be mirrored layer by layer in the properties of the overall assembly. Important questions then included, how many of the layers need to contain fire retardant additives to achieve a target performance for the panel assembly? In addition, the effect of the glue used in the construction of the panel was unknown, but it was hypothesized that due to the flammability of most glues, the adhesives have a significant impact on the requirement for FR additives in each layer. The main apparatus used in the investigation is a Cone Calorimeter. Testing followed the ASTM E-1345 protocol, so the time to ignition, mass loss rates, heat release rates (HRR) during open flaming periods, peak heat release rates and time to reach peak heat release rate were measured. These parameters were used to assess the relative fire performance of each base material and assembly, thus deducing the efficacy of the fire retardant additives in each combination. The panel assembly selected for the present study is typical of laminated MDF panels used as elevator cab lining materials. All materials were obtained from Elevator Cab Renovations (ECR), the industrial partner for much of this work. Both front and backer materials were made by Arborite and both regular NFR and FR versions of each were used. Similarly NFR and FR core MDF specimens were used in custom assembled test panels glued together using Permagrip PG107, a common glue in the industry. In total seven different individual materials, eight unglued panel assemblies and eight fully assembled and glued laminated panels were tested for this research. In most cases, three repeat tests were run for each specimen to determine repeatability and, where necessary, allowing averaging to reduce overall variability in the results. Key performance indicators were determined using the results from each test and the relationships between various combinations of samples were examined. A recommendation is presented that FR additives should be used in the front and core sections of the panel assembly. This is based on the results across all tests and the observations made regarding the effectiveness of FR additives to each individual material, as well as to the panel assembly. It was also concluded that there is no strong evidence to demonstrate that the use of NFR backer materials significantly reduces the fire performance characteristics of the panel assembly when FR additives are used in the other two layers. Finally, there is strong evidence that the glue in a laminated assembly does lead to increased values of measured HRR, and also has a discernible effect on the rate of Carbon Monoxide (CO) production from the assembly.