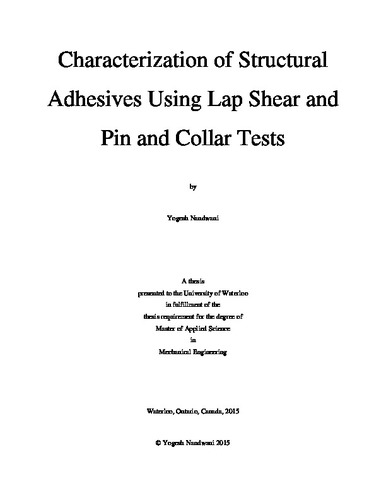 Increasingly stringent government regulations on vehicle fuel economy and emission standards have challenged auto manufacturers to improve the fuel economy of cars built for sale in North America. Lightweighting vehicles is an efficient method of achieving this goal, as lighter vehicles have better fuel economy compared to heavier ones. Vehicle weight can be reduced by optimized design and by using alternative lightweight materials, such as aluminum and magnesium. Combining both approaches results in a vehicle which is comprised of strategically-placed materials to fulfill performance requirements. Constructing a vehicle frame with dissimilar materials using traditional joining methods can be challenging. Adhesive bonding is one alternative to traditional methods with advantages in areas such as mitigation of galvanic corrosion, reducing stress concentrations, and enhanced fatigue strength. The strength of an adhesive bond is highly dependent on the conditions of the surfaces of the bonded materials. Two different toughened epoxy structural adhesives were investigated in this study, a two part epoxy (DP460NS) and a one-part epoxy (SA9850). Experimental lap shear tests were undertaken to identify optimum strength combinations between adhesives and adherend surface preparation. Each adherend was prepared using a variety of pretreatment methods including conversion coatings, anodization, mechanical abrasion and intentional contamination by forming lubricant. The samples were assembled at different time periods to observe the effect of time on the surface pretreatment methods. One limitation of this test is that the joint is subjected to mixed-mode loading. The experimental tests were simulated using a commercially available FEA software package and measured material properties to provide insight into the measured strength values. Pin and collar tests were performed to measure adhesive strength in pure shear loading at varying strain rates. Several displacement measurement methods were investigated, with an optical displacement providing the highest resolution in measurement. When bonding aluminum, it was found that adhesive joints made with DP460NS exhibited higher dependence on surface preparation methods, compared to the joints produced with SA9850. Gritblasted surface produced the best adhesion to DP460NS. Bonds created with SA9850 produced relatively high joint strength numbers on all tested combinations, with contamination of adherends with a metal forming lubricant (drylube E1) producing the strongest bonds. When bonding magnesium, the highest joint strength numbers were acquired by a gritblasted surface with DP460NS, and contaminated surface with SA9850. However, the joint strength numbers were consistently lower than those acquired with aluminum adherends, suggesting the need for research into other types of pretreatment methods. For the pin and collar tests, the adhesives exhibited an increase in strength at higher shear deformation rates. The very small deformations, on the order of microns and similar to the deformation of the adherends during the test, did not allow for full stress-strain curves to be developed. However, the strength characteristics were measured, where the two-part epoxy (DP460NS) demonstrated a larger increase in strength with strain rate compared to the one-part epoxy (SA9850). Recommendations for future work include testing dissimilar adherend materials to investigate the effect of imbalanced joints on adhesive strength. Additional tests should be investigated to measure shear properties such as the edge notch flexural beam. Ultimately, the contributions of this research include the evaluation of surface preparations for adhesive joining of important lightweighting materials, and the measurement of strength in shear loading, which is necessary for implementation of these properties with computer aided engineering approaches.