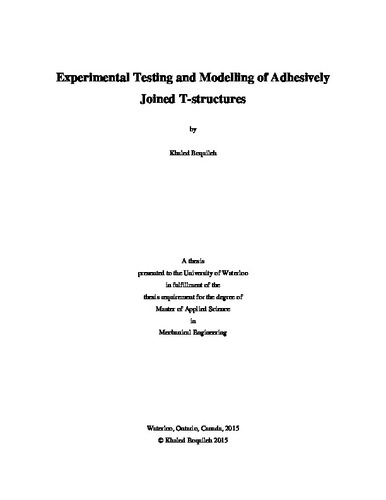 As fuel-efficiency standards continue to push original equipment manufacturers (OEM's) to produce more fuel-efficient vehicles, it is important to look at new and innovative ways to achieve this goal. Although there are multiple solutions to this challenge including powertrain refinement and aerodynamics, a primary focus is to reduce the weight of vehicles. To achieve this goal the designers can utilize combinations of high strength and lightweight materials to reduce vehicle structure weight. The main challenge that arises when joining mixed materials using conventional methods such as welding or mechanical fasteners is galvanic corrosion. This form of corrosion occurs when two dissimilar materials are in contact over time. Furthermore, dissimilar materials often cannot be joined using traditional methods such as welding. Adhesives provide a solution to this challenge, providing a barrier between the two materials to mitigate galvanic corrosion. Additionally, adhesives can provide improved NVH (noise, vibration and harshness) performance and create a more evenly distributed stresses within the joint. With increasing interest in adhesives for joining materials, it has become important for designers to have accurate material models to use in finite element simulations for design and optimization. The goal of this thesis was to evaluate the feasibility of applying bulk material and coupon-level test data to predict structural response and failure under quasi-static and dynamic conditions. Two commercial toughened structural epoxy adhesives were investigated (DP460NS and SA9850, 3M Company, Minnesota) to join structures subject to quasi-static and dynamic load levels. Structural testing was undertaken on T-shaped samples created by adhesively joining two Al6063-T5 C-channels. For each adhesive, four structural experimental tests were undertaken including quasi-static direct shear (2.5 mm/min), quasi-static torsion (2.5 mm/min), unsupported dynamic impact shear (4.43 m/s) and supported dynamic impact shear (3.96 m/s). Surface preparation is an important component when assessing the strength of the adhesive. Grit blasting was used to prepare the surfaces of the DP460NS samples since this was previously demonstrated to provide good bond strength with low variability. The second adhesive (SA9850) was tested with two surface preparations, grit blasting and with forming lubricant applied to the surface, where the forming lubricant surface contamination provided higher strength and lower variability. In general, the four experimental tests demonstrated consistent responses concerning shape, maximum force and displacement at failure. In addition, it was found that the dynamic impact forces at failure were larger than the quasi-static forces at failure. This result was expected because both adhesives were strain rate dependent. Numerical models of the experiments were developed using adhesive mechanical properties determined in previous studies from bulk and coupon-level tests, and integrated into a cohesive element formulation. A boundary condition sensitivity study was undertaken, guided by imaging acquired during the experimental testing. The final models comprised C-channels modeled with solid elements, adhesive modeled with cohesive elements, and a detailed model of the experimental fixture to account for fixture compliance during the test. The aluminum C-channels were modeled using an incremental plasticity model with a von Mises yield surface. It was determined that deformation rate effects were significant for the adhesive and a rate-dependent cohesive model was implemented to address this challenge. Lastly, a mesh convergence study was carried out and resulted in a convergence at an element size of 2mm. The numerical simulation results for the SA9850 adhesive were in good agreement with the experiments for all four load cases, demonstrated by an excellent cross correlation rating. Similar results were obtained for the DP460NS, with the exception of the quasi-static torsion case, where the numerical model underpredicted the force and displacement at failure. This was attributed to the constitutive model not accounting from Mode III material properties, the mode of loading for this test case, which can differ significantly from Mode II for some adhesives. In general, the failure forces predicted in the numerical simulations were lower than the average experimental force, which was also proven through statistical analysis. This issue was attributed to the source of the shear data for the material models, which was a thick adherend lap shear. The shear data used for the material model development included a relatively thick bond line, which is known to affect the measured strength properties. Additionally, the thick adherend lap shear test does not result in pure shear data. It is recommended that further testing be undertaken to measure shear properties to be used in future modeling efforts. Fatigue testing was also carried out on the two adhesives. The testing was done with a tensile test sample, single lap shear sample and a structural test sample. The S-N curve measured with tensile test samples was log-linear. However, the single lap shear fatigue testing revealed that at lower stress amplitudes the effects of the bending of the adherend caused early failure of the joint and in many cases resulted in failure of the adherend and not the adhesive, emphasizing the importance of joint design. Fatigue testing on the T-structure demonstrated a similar curve shape when compared to the single lap shear testing with the primary difference being that the structural tests resulted in fewer cycles to failure at the same stress amplitude. This difference can be attributed to the larger adhesion area in the structural sample when compared to the single lap shear sample, and therefore a higher likelihood of defects in the joint that could initiate fatigue failure. The main goal of this thesis was to verify the applicability of a cohesive approach to model structural response. In general, the model results demonstrated that material properties measured at the bulk and coupon levels can accurately predict the response and failure of an adhesive joint in a structural test.