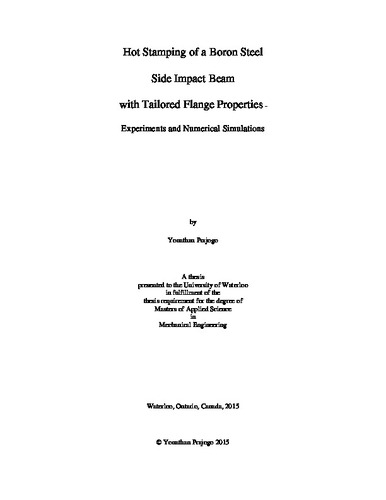 The effect of tailoring of hot stamped components is investigated, specifically the introduction of a tailored (locally softened) flange within an otherwise martensitic hot formed side impact beam. The effect of tailoring on the resulting micro-hardness distribution and crash response during three-point bending is examined. The “in-die heating” tailoring method is considered, using a cooled die with local heating in the flange region. The heated regions cool the flange at a lower cooling rate to produce a softer region with higher ductility. In the current work, three different die temperatures are chosen for the forming conditions in the tailored flange region. A fully hardened beam is hot formed and quenched with the dies set at room temperature as a benchmark case. Die temperatures in the flange region of 400 and 600°C are considered to produce the tailored side impact beams with reduced hardness in the flange. The material considered is Usibor® 1500-AS boron steel in thicknesses of 1.2 and 1.8 mm. Two quenching periods of 4 and 10 s are also studied. After forming, the 1.2 mm thick beams exhibit very little difference in hardness distribution between the two quenching periods. The 1.8 mm thick beams have a larger difference in hardness distribution in the sidewall region caused by the difference in quenching (hold) time, with the shorter quench resulting in a softer sidewall condition. The measured micro hardness in the flange area of the 1.2 mm thick beams was 480, 360, and 225 HV (compared to 480 HV in the fully quenched region away from the flange) when the flange region of the dies are set to room temperature, 400°C, and 600°C respectively. For the 1.8 mm thick beams, the measured hardness was 475, 270, and 205 HV for the corresponding die temperatures and a 10 s quench period. The tailored hot formed side impact beams are tested under three-point bend loading using two back plate configurations, referred to as the full back plate and split back plate configurations. The split back plate configuration was intended to focus deformation at the center of the beam thereby inducing fracture in the flange region. The beams exhibited two deformation modes, referred to as a “wrapping mode” versus a “collapse mode”. In the wrapping mode, the friction between the punch and beam surface sufficient to cause the deforming beam to wrap around the indentor resulting in a higher overall load level and energy absorption. In the collapse mode, the cross-section collapses or folds under the indentor leading to a lower bending resistance. The mode selection was spurious with nominally identical beams exhibiting both responses. In general, the fully hardened beams have the highest peak load while the tailored beams formed with a 600°C dies have the lowest peak load in the 3-point bend experiments. None of the beams tested exhibited global fractures for all conditions considered. Numerical models of the tailored hot forming process and subsequent three-point bend experiments were developed. The material model developed by Akerstrom (2006, PhD Thesis, Lulea University of Technology), as implemented in LS-DYNA with modifications proposed by Schill et al. (2013, 4th Int. CHS2 Conf., pp. 31-38) for tailoring simulations with a temperature hold period, is used to predict the hardness after tailored hot forming, while the TCM II constitutive model developed by Bardelcik et al. (2014, Mat. and Des., pp. 509-525) is used to predict the crash performance of the tailored hot formed beams. The forming simulations were able to accurately predict the hardness of the non-tailored, fully hardened beams with a predicted hardness of greater than 480 HV for both thicknesses and quenching periods. The hardness of the tailored (softened) flanges was predicted within 27 HV (12%) for the 600°C die temperature and 63 HV (18%) for the 400°C die temperature. A parametric study using the three-point bending model, demonstrated that the deformation mode (wrapping versus collapsing) was controlled by the friction between the punch and beam surface. High friction levels promoted a wrapping deformation mode that produces higher load levels. For high friction cases, the simulations were able to predict the force versus displacement response of the wrapping mode beams with a full back plate configuration very closely up to an impactor displacement of 30 mm. At this point, the beams in the experiments begin to soften due to fracture in fold regions which was not accounted for in the models. The predicted loads for the beams with a split back plate configuration at peak load displacement of the experiment were lower than measured by 4.8 kN (or 22%), possibly due to an additional gap that formed between the flange and the back plate caused by a thermal distortion. Tailoring the flange of the side impact beams lowered the peak force value when compared to the peak force of a fully hardened beam. Most of the fractures seen during the three-point bend experiments were located at the fully hardened region of a tailored beam. There was no spot weld failure in any of the three-point bend experiments regardless of the forming temperature or the spot weld configuration. Future work should include a bend experiment for which the specimens are more prone to fracture in the reduced hardness area, to further examine the role of tailoring in controlling the onset of fracture.