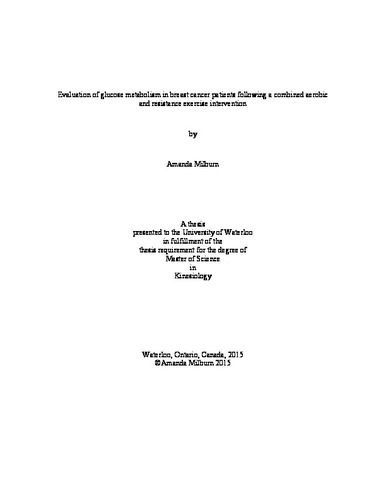 BACKGROUND: Breast cancer patients typically present with impaired glucose metabolism at diagnosis. Given that increased fat mass and decreased lean mass develop throughout the treatment trajectory and into survivorship, these impairments in glucose metabolism may worsen and may increase the risk of breast cancer patients developing secondary diseases such as diabetes in survivorship. Aerobic and resistance exercise training are known to improve glucose regulation in various clinical populations, but this has not been comprehensively explored in breast cancer patients. OBJECTIVES AND HYPOTHESES: The primary objectives of this study were to: 1) examine the differences in glucose and related markers, as well as potential explanatory measures such as body composition, inflammatory markers, aerobic capacity, muscular strength, and dietary intake between a heterogeneous group of breast cancer patients and a group of young healthy females, and 2) evaluate the potential changes in these collective measures in breast cancer participants following 24 one hour sessions of a combined cardiovascular and strength training program. Secondary objectives were to: 1) examine potential effects of the time to complete 24 one hour sessions on metabolic parameters and 2) evaluate baseline measures of the breast cancer group that dropped out to those that completed the exercise program to identify potential bias in the group that completed the exercise program. We hypothesized that breast cancer participants, prior to exercise training, would present with poorer glucose concentrations and related markers, body composition, inflammatory markers, aerobic capacity, muscular strength, and dietary intake in comparison to the healthy young reference group. We also hypothesized that all measures would improve with the exercise program and that dietary intake would ! iii! remain the same. Additionally, we anticipated that patients who completed the 24 exercise sessions in a shorter time-frame would exhibit greater improvements in glucose- related parameters compared with those who took longer to complete the program. Baseline measures between breast cancer exercise completers were expected to be similar to those that dropped out of the program. METHODS: Breast cancer patients, at any stage of disease, any phase of treatment and any treatment time, were recruited to this study. Participants underwent a supervised exercise program consisting of 24 1-hour sessions of combined aerobic and resistance exercise (usually aerobic training to start followed by resistance training). Attendance of two exercise sessions per week for one hour was prescribed. Assessments were done at baseline and following the exercise program for the breast cancer patients Baseline assessments from the patients were compared with similar measures collected, at a single time point, in the young healthy female reference group. We evaluated glucose and related markers by biochemical analysis on fasting blood. Body composition was assessed by dual energy x-ray absorptiometry (DXA) scans, body mass index (BMI) and waist circumference (WC). Cardiovascular capacity in breast cancer patients was measured by a graded exercise test and strength was assessed using a predictive one repetition maximum (1RM) test on the upper and lower limbs. Dietary intake was assessed using 3-day food diaries. RESULTS: Prior to exercise training, breast cancer patients presented with higher measures of fasting plasma glucose, glycated hemoglobin, IGF-1, insulin and a tendency for higher c-peptide when compared to the young healthy reference group; however, there were no differences in inflammatory markers between groups. Furthermore, ! iv! percentage of fat, total fat mass, BMI and WC were elevated in breast cancer patients compared with the reference group. Aerobic exercise tests, resting heart rate and muscular strength demonstrated poorer results relative to the reference group. Daily caloric intake was higher in the reference group but macronutrient distribution was not significantly different. Following 24 sessions of combined aerobic and resistance training, there were significant reductions in fasting plasma glucose (5.4 ± 0.7 vs. 5.0± 0.4 mM, p=0.008) and IGF-1:IGFBP-3 (0.33 ± 0.12 vs 0.27 ± 0.09 ng/mL, p= 0.018). Homeostatic model assessment for insulin resistance (HOMA-IR) (2.9 ± 2.4 vs. 2.1 ± 1.7 ng/mL, p= 0.06) tended to improve. IGF-1 and lactate tended to decrease following the exercise program as well. Inflammatory markers primarily remained unchanged but a significant increase in TNF-α as well as a tendency for increased IL-1β were observed. Increasing delta TNF-α (from baseline to post-exercise program) was correlated with increasing delta of total fat mass (r= 0.908, p=0.0124, n= 6). Cardiovascular capacity, resting blood pressure as well as lower limb muscular strength improved following the exercise program. There were no changes in dietary intake during the exercise program. No differences were identified between the breast cancer dropout group and the breast cancer group that completed the exercise program. DISCUSSION AND CONCLUSIONS: Breast cancer patients presented with various metabolic, body composition, and fitness parameters that were poorer than the young healthy reference group. The exercise intervention was associated with improved plasma glucose, HOMA-IR and IGF-1:IGFBP-3, suggesting improvements in glucose metabolism. Future work needs to further evaluate these improvements and compare them with a usual care group that is undergoing treatment but no exercise intervention.