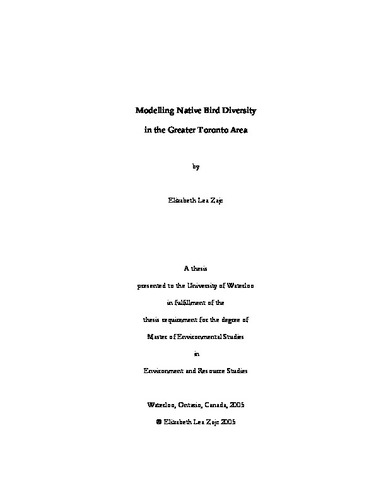 Human-dominated landscapes often have habitat loss and fragmentation. These characteristics described at the landscape scale, called landscape elements, influence species diversity and distribution. These landscape elements include such descriptions as the amount of habitat in the landscape and the degree of fragmentation of the habitat. "Optimization of landscape pattern" studies which landscape elements will maximize species diversity and/or distribution. Some general conclusions have emerged from this research. For example, for some bird species the size of the habitat patch in which a species nests has been found to be more important than landscape variables. However, preliminary research suggested that landscape elements such as the matrix are important urban areas. My study addressed this problem by asking: which elements of the landscape are most important for predicting avian species richness and abundance in the Greater Toronto Area? A literature review revealed a number of variables that have been found to influence bird species diversity within a landscape: area of habitat in which the species nests, amount of habitat within the landscape, degree of fragmentation, vegetation characteristics of the habitat patch, and area within the landscape deemed urban in municipal land-use designations (amount of urbanization). From this literature, I formulated four hypotheses describing the most important variables for avian diversity: (1) the area of the habitat patch is most important, (2) only variables describing the habitat patch itself are important, (3) the area of the habitat patch is important, but landscape variables should also be considered and (4) urbanization is most important. These hypotheses were considered competing explanations of bird species diversity at the landscape scale. <br /><br /> A database of breeding bird data and landscape information, in a geographic information system platform, was used to investigate the comparative strength of the competing hypotheses for the Greater Toronto Area. A mathematical expression with a Poisson model format was created to represent each hypothesis. The model selection technique based on Kullback-Leibler information using the Akaike Information Criterion was deemed most appropriate for the comparison of the models. Four separate Poisson model competitions were completed using two habitat types and two response variables: species richness and total abundance. In three of the four competitions, the best model included the habitat area and the amount of urbanization in the landscape. In the forth competition, this model was considered as strong as another model which included habitat area, amount of habitat in the landscape and degree of fragmentation. The results from the model competition support the hypothesis that habitat area is important, but landscape variables must also be considered to explain avian richness and total abundance. It appears that maintaining native bird biodiversity in the Greater Toronto Area should focus on preserving and possibly increasing habitat area and decreasing adjacent urbanization. Exploration of the best model in the forest analysis with the richness response variable found that a 10% increase in habitat area cause approximately a 10% increase in species richness, and a 10% increase in urban area caused approximately a 20% decrease in species richness. Consequently, current natural heritage planning in Ontario should consider urban development as an important negative effect on native birds.