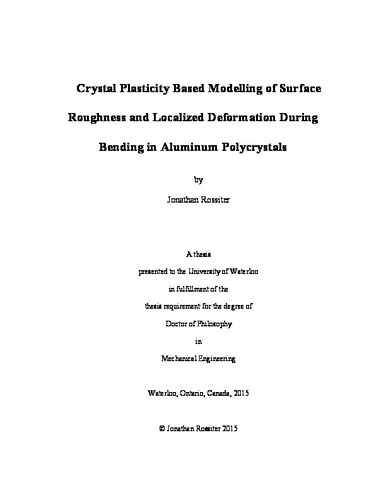 This research focuses on numerical modeling of formability and instabilities in aluminum with a focus on the bending loading condition. A three-dimensional (3D) finite element analysis based on rate-dependent crystal plasticity theory has been employed to investigate non-uniform deformation in aluminum alloys during bending. The model can incorporate electron backscatter diffraction (EBSD) maps into finite element analyses. The numerical analysis not only accounts for crystallographic texture (and its evolution) but also accounts for 3D grain morphologies, because a 3D microstructure (constructed from two-dimensional EBSD data) can be employed in the simulations. The first part of the research concentrates on the effect of individual aluminum grain orientations on the developed surface roughness during bending. The standard orientations found within aluminum are combined in a systematic way to investigate their interactions and sensitivity to loading direction. The end objective of the study is to identify orientations that promote more pronounced surface roughness so that future material processes can be developed to reduce the occurrence of these orientations and improve the bending response of the material. It was identified that Goss and Brass textures have the largest negative impact on bendability of the aluminum, with Goss being the most dependent on loading direction and Brass being detrimental in all loading directions. The second part of the research focuses on the representation of grain boundaries within the models. A new modeling approach of adding 20 μm wide grain boundary zones in conjunction with using single crystal material properties was developed and validated. Large columnar grain samples of aluminum were produced at McMaster University and analysed with Electron Back Scatter Diffraction to identify the grain structure prior to destructive testing. In-situ Digital Image Correlation strain measurements were taken during a mechanical strength test. The combination of initial microstructure information as well as in-situ strain distributions allowed for a study analysing the effect of adding grain boundary zones into the models. The results showed that the error in predicted strain distribution could be reduced by 60% by the addition of hard grain boundary zones. During bending simulations using the grain boundary zone modelling approach, it was found that the network of hard grain boundary zones worked to distribute the applied bending load over more of the sample as opposed to the historic approach of representing grain boundaries as neighbouring regions with different orientations. The addition of grain boundary zones into the models can improve the accuracy of future studies.