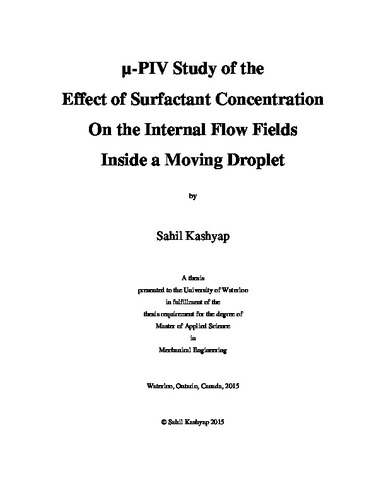 Droplet microfluidics has enormous potential in scientific research as well as in industrial and medical applications. Droplet microfluidics enables the generation of segments in the form of discrete fluid packets. These liquid segments are mono dispersed in a continuous phase and have wide range of applications in engineering, chemistry, biological, and medical diagnostics. Another advantage for the use of micro droplets is the fast mixing of reagents dosed inside droplets. Fast and efficient mixing of reagents in droplets strongly depends on the internal flow fields inside the droplet. Surfactants are often added to the dispersed phase to stabilize the generated droplets and prevent droplet coalescence. This study examines the effect of surfactant concentration on the internal flow fields inside a moving droplet. Two different surfactants, SDS and Tween 20 are chosen as they allow a wide timescale of adsorption to be studied due to relative difference in their size. Micro particle imaging velocimetry (μPIV) is used in the examination of the internal flow inside the droplet. Experiments with surfactant are done in two surfactant concentrations: above CMC (critical micelle concentration) and below CMC. The study with SDS has been performed at two different droplet regimes, squeezing and transition. The effect of droplet shape is also studied by comparing the surfactant effect between slug and disk-shaped droplet. The primary difference between these shapes is the extent of liquid/wall friction between the droplet and the channel wall. It is observed that addition of surfactant to the slug droplet at low concentrations causes retardation in the internal flow, which is primarily attributed to the action of opposing Marangoni forces. Achievement of complete remobilization in the internal flow depends on surfactant type and the droplet operating regime.

Sahil Kashyap (2015). μ-PIV Study of the Effect of Surfactant Concentration On the Internal Flow Fields Inside a Moving Droplet. UWSpace. http://hdl.handle.net/10012/9723