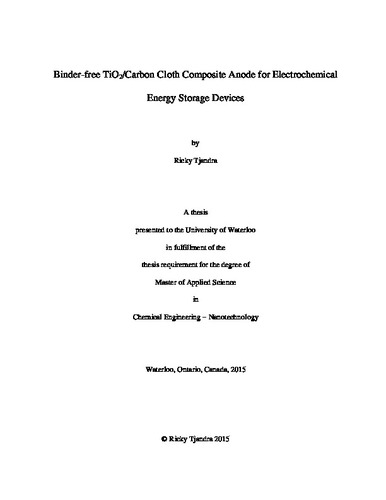 Lithium-Ion Capacitors are a new type of hybrid capacitor that combines both supercapacitors and lithium-ion batteries into one device. It has a promising future as the next-generation electrochemical energy storage device for use in applications that require both high energy and power densities such as electric and hybrid electric vehicles. Current commercial lithium-ion capacitors are made up of activated carbon cathodes and graphite anodes. The cathode displays supercapacitative behaviour while the anode is an insertion-type anode commonly used in lithium-ion batteries. Despite being commercialized, many improvements can be made to lithium-ion capacitors especially for the anode such as increasing the power and energy densities. Anatase TiO2 has been shown to have excellent performance and a promising candidate to replace graphite as the anode in lithium-ion capacitors. Herein, nanosized TiO2 has been studied as a binder-free active material as an alternative anode material for lithium ion capacitors. These TiO2 nanocrystals have crystal sizes smaller than 10 nm and can be dissolved directly into organic solvents, removing the need for any binders or additional materials to improve dispersion on the substrate. The nanocrystals are drop casted onto carbon fiber cloth, forming a composite electrode that is binder-free and flexible. electrode was shown to have a reversible capacity of 315 mAh/g and 410 mAh/g at a current density of 100 mA/g and 34 mA/g respectively.