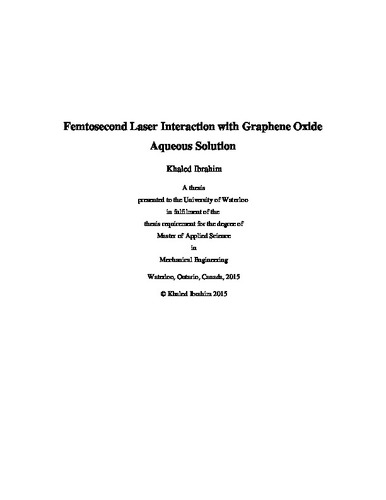 In this study fs pulsed laser of wavelength 800 nm was used to reduce two sets of aqueous graphene oxide solution namely low (0.5 mg/mL) and high concentration (6.2 mg/mL). It was found that after fs laser treatment the surface roughness of the graphene oxide flakes was reduced by 95.6% and 66% for the high and low GO concentration films respectively. It was also found that the resistivity of high concentration (6.2 mg/ml) rGO films was enhanced by 4 orders of magnitude as a result of the laser treatment which could raise the electron mobility of the rGO films close to that of pristine graphene films. The C-O atomic ratio for the high concentration graphene oxide samples was found to increase by 3 times after 6 hrs of laser treatment. A novel technique of graphene oxide sol-gel (GOSG) fabrication was introduced where GOSG was obtained by placing the laser focal point at the solution/air interface. By manipulating the exposure parameters such as the ablated volume, laser energy and focal length, the GOSG was obtained at various times in the range of as 8 min to 7 hrs. The chemical analysis (XPS) revealed the reduction of the COOH molecules as a result of the exposure process, which is due to removing the OH- from the GO sheets and vaporization of the water content within the solution. Surface morphology analysis using AFM and SEM showed that all GOSG thin films except the 7 hrs one depicted a high surface roughness and porous surface area with randomly stacked graphene oxide layers. However, a smooth stacking layered structure and the smallest average surface roughness was observed in the 7 hrs GOSG, which was pertained the behavior of pure graphene as proved by the FTIR analysis.