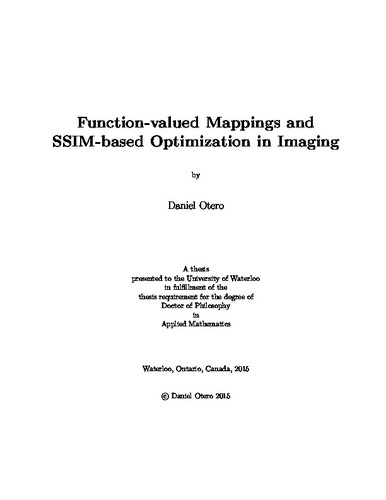 In a few words, this thesis is concerned with two alternative approaches to imag- ing, namely, Function-valued Mappings (FVMs) and Structural Similarity Index Measure (SSIM)-based Optimization. Briefly, a FVM is a mathematical object that assigns to each element in its domain a function that belongs to a given function space. The advantage of this representation is that the infinite dimensionality of the range of FVMs allows us to give a more accurate description of complex datasets such as hyperspectral images and diffusion magnetic resonance images, something that can not be done with the classical representation of such data sets as vector-valued functions. For instance, a hyperspectral image can be described as a FVM that assigns to each point in a spatial domain a spectral function that belongs to the function space L2(R); that is, the space of functions whose energy is finite. Moreoever, we present a Fourier transform and a new class of fractal transforms for FVMs to analyze and process hyperspectral images. Regarding SSIM-based optimization, we introduce a general framework for solving op- timization problems that involve the SSIM as a fidelity measure. This framework offers the option of carrying out SSIM-based imaging tasks which are usually addressed using the classical Euclidean-based methods. In the literature, SSIM-based approaches have been proposed to address the limitations of Euclidean-based metrics as measures of vi- sual quality. These methods show better performance when compared to their Euclidean counterparts since the SSIM is a better model of the human visual system; however, these approaches tend to be developed for particular applications. With the general framework that it is presented in this thesis, rather than focusing on particular imaging tasks, we introduce a set of novel algorithms capable of carrying out a wide range of SSIM-based imaging applications. Moreover, such a framework allows us to include the SSIM as a fidelity term in optimization problems in which it had not been included before.