We Have Never Been Secular: The Concept of the Secular and the Dutch Collegiants in the Radical Enlightenment 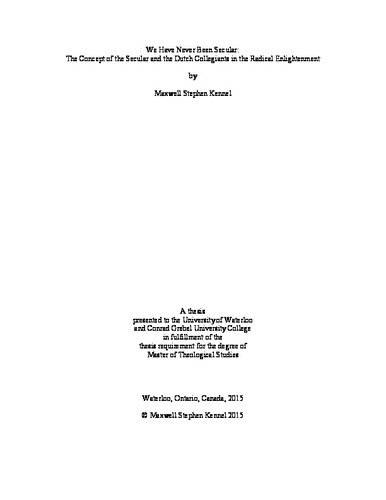 The following study examines the history of the seventeenth century Collegiant group in the Dutch Republic, focusing on their blending of Spiritualist and Rationalist influences. By reading Collegiant Rational Religion through the lenses of social history and the history of ideas, the following study makes explicit the ways in which the Collegiants were simultaneously a religious and secular movement. Being both religious and secular, the historical example of the Collegiant group challenges contemporary distinctions between religion and the secular. Chapter 1 outlines the history of the Collegiants in the context of the seventeenth century Dutch Republic, from their first meetings in Rijnsburg in 1619 up to their period of Rational Religion. Through an examination of Collegiant ideas and practices, the first chapter describes the genesis of the movement after the Synod of Dordrecht, the early millenarian influence, and the Spiritualist period of the Collegiant group. Chapter 2 then widens the scope of inquiry by situating the Collegiant group in the Early Enlightenment, focusing in particular on the Radical Enlightenment. The second chapter advances two concurrent arguments against a teleological reading of the Collegiant transition from Spiritualism to Rationalism, each concerned with preserving the dignity of the Collegiant blending of Rational Religion, rather than reducing it to a transitory phase on the way to Rationalism. The two concurrent arguments against the teleological reading of the Enlightenment include (1) the critique of the concept of Enlightenment as a normative ideal as provided by critical theory, and (2) the recovery of the role of religion during the Enlightenment period as provided by recent revisions to historical scholarship. Chapter 3 narrows the scope of inquiry to the Collegiant transition to Rationalism, focusing on the ways in which the Collegiants blended together Spiritualism and Rationalism to form a Rational Religion that emphasized the compatibility of faith and reason. Through an examination of Collegiants who belonged to the Spinoza Circle and Collegiants who were also Mennonites, Chapter 3 concludes by describing the schismatic effect of the Bredenburg dispute and the collapse of the blended approach in the late Collegiant Rationalist period. Chapter 4 concludes the study by rethinking the contemporary divide between the categories of religion and the secular by drawing parallels between Collegiant Rational Religion and the contemporary Continental Philosophy of Religion, the latter of which is represented by theologian and philosopher Daniel Colucciello Barber.

Maxwell Stephen Kennel (2015). We Have Never Been Secular: The Concept of the Secular and the Dutch Collegiants in the Radical Enlightenment. UWSpace. http://hdl.handle.net/10012/9605