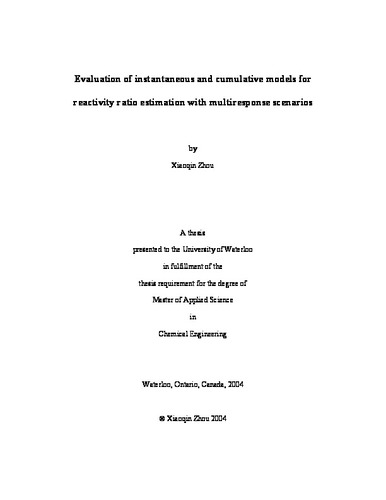 Estimating reactivity ratios in multicomponent polymerizations is becoming increasingly important. At the same time, using cumulative models is becoming imperative, as some multicomponent systems are inherently so fast that instantaneous "approximate" models can not be used. In the first part of the thesis, triad fractions (sequence length characteristics) are employed in a multiresponse scenario, investigating different error structures and levels. A comparison is given between instantaneous triad fraction models and instantaneous composition model, which represent the current state-of-the-art. In the second part of the thesis, extensions are discussed with cumulative composition and triad fraction models over the whole conversion range, thus relating the problem of reactivity ratio estimation to the optimal design of experiments (i. e. optimal sampling) over polymerization time and conversion. The performance of cumulative multiresponse models is superior to that of their instantaneous counterparts, which can be explained from an information content point of view. As a side-project, the existence of azeotropic points is investigated in terpolymer (Alfrey-Goldfinger equation) and tetrapolymer (Walling-Briggs equation) systems.