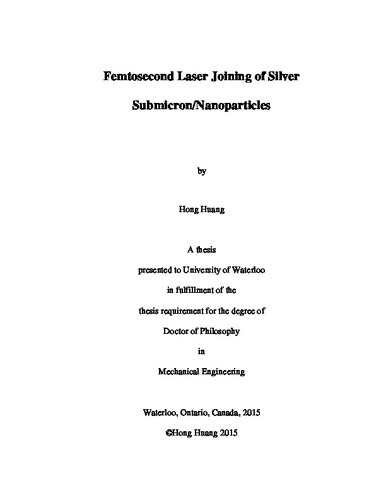 The development of future devices is towards to the miniaturization and performance improvement. This requires the large scale integration of nanodevices. Nanojoining is an essential step for the industrial scale production of nanodevices which possess extensive applications in nanoelectronics, nanophotonics and biomedicines. Many techniques have been developed to produce nanojoining, and among them femtosecond (fs) laser nanojoining is a promising one due to its limited thermal damage to the fabricated nanomaterials. However the fs laser nanojoining technique is still not probably characterized. In this thesis, the research of fs laser nanojoining of silver (Ag) nanomaterials with or without polyvinylpyrrolidone (PVP) coating is conducted in different environments (aqueous solution, air, vacuum), targeting to different application areas. It is reported that the joining behavior of PVP coated Ag nanoparticles (NPs) can be manipulated by controlling the distribution of localized surface plasmon induced electric field enhancement (or hotspots) and/or the decomposition of PVP coatings into amorphous carbon or some ionized products. This facilitates the fabrication of joined-NPs structures with tunable plasmonic properties by tuning the geometries of the structures, for possible application as SERS (surface enhanced Raman spectroscopy) detector. For Ag particles without PVP coating and exposed to vacuum (10-6 Torr), their joining behavior under fs laser radiation is also controlled by the hotspots; and high integrity interconnection of Ag particles can be obtained benefiting from the localized ablation of the particles in the hotspots. The joining efficiency can be improved by introducing reactive oxygen gas which produces external heating to the irradiated particles through O Ag reaction on the surface of Ag particles in the hotspots. Overall, the hotspots-dependent fs laser nanojoining technique which is developed in this research provides an alternative way for precise fabrication of nanodevices based on the interconnection of nanoscale functional components.