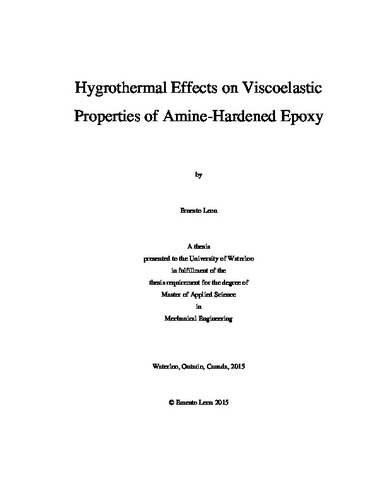 In this work the behaviour of a DGEBA/TETA epoxy resin system, a candidate resin for electrically conductive nanocomposites, has been characterized after exposure to hygrothermal conditions for up to 2400 hours. The objectives of the study were to determine the diffusion coefficient, the viscoelastic and glass transition temperature changes as result of long-term aging. Due to the large number of samples required, inherent material properties and physical constraints of the measurement instruments, significant efforts were made to develop an appropriate molding technique to fabricate consistently high quality samples. Over 200 thin samples were fabricated for gravimetric measurements and dynamic mechanical analysis (DMA) testing at iso-strain and temperature-sweep. As far as we know, this is the first known comprehensive report of the variation of storage modulus as a function of time, temperature and water uptake for an epoxy resin system. When room temperature DMA tests were conducted on progressively aged samples, we found material behaviour to be highly dependent on the hygrothermal aging conditions, such as temperature, relative humidity and exposure time. In the case of storage modulus, it was found that higher dry aging temperature can be detrimental on the modulus as exposure time increased. This effect, however, was attenuated when coupled with relative humidity conditions where the modulus values increased. This behaviour can be associated with reported hydrogen bonding mechanisms occurring in the material. When tests were conducted after at least 80 days of aging using temperature ramp-up in the DMA, the reverse is found. The effects of structural relaxation of physical aging including volumetric contraction became evident during ramp-up. For dry aging condition samples, the storage modulus increased while relative humidity conditions reduced it, consistent with plasticization. It would appear then that the temperature ramp-up method is able to delineate physical aging and plasticization effects prior to the onset of glass transition. Finally, the glass transition temperature is greatly influenced by hygrothermal conditions. The results for the different conditions in this study can be interpreted using various theoretical concepts published in the open literature. They include the formation of hydrogen bonds between the water molecules and the OH groups of the epoxy. Loss modulus and tan δ as measured by DMA indicated that the former tends to be more sensitive than the latter, better discerning the effects of relative humidity.