Commissioning of a Modular Steiner Tunnel 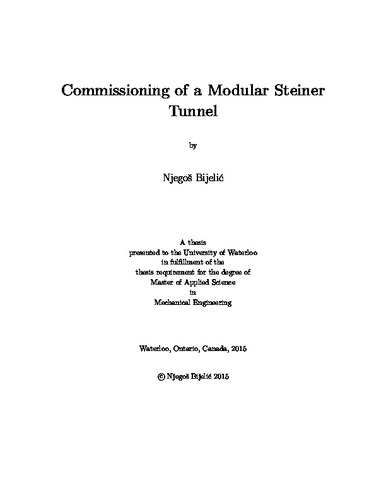 This thesis presents methods used for, and results from, tests conducted during the final installation and commissioning of a modular Steiner tunnel delivered to the UWFRL. The overall aim of the present research is to design the support systems for this new Steiner tunnel, to commission the tunnel for operation and to characterize the final tunnel operation against a series of materials with known fire performance characteristics. The first stage of commissioning is to design and implement the safety controls system for the Steiner tunnel, fulfilling all the requirements of the safety regulations and provide additional safety calculations needed for approval of the system. Following this, the overall tunnel operation is tested with the tunnel installed at its full 25 foot length. In the first phase of testing, a series of `pre- calibration' experiments is conducted using various off-the-shelf wood product samples. These tests are designed to examine the behaviour of the tunnel prior to the much more costly, formal red oak calibration test, since it has been reported that red oak calibration criteria can be fairly difficult to meet, especially for newly constructed tunnels. Tests are conducted on various wood products including red oak, OSB, particle board, and plywood to evaluate the tunnel performance. The three specific parameters that are found to have significant influence on tunnel operation are gas flow to the burner, draft pressure within the main tunnel section, and the exhaust damper position. During calibration tests, it is found that of the three parameters that are studied (gas flow, tunnel draft, and damper position), the damper position has the most influence on FSI. The far damper should be utilized to control tunnel air flow. If this is not possible, the damper position should be kept 18 pipe diameters from the end of the tunnel. Gas flow effects are found to be largely dependent on outside temperatures, and most likely is outside of lab facilities control. For gas flow, flame spread results are most affected for flow rates below 7.0 m^3/hr which corresponded to maintaining inlet gas temperature above 18C. Therefore, it is determined that the tunnel should only be operated when the lab temperature is above 18C. Airflow through the tunnel as indicated by tunnel draft pressure is found to greatly impact measured flame spread characteristics for most samples tested. The appropriate range for the tunnel draft pressure is determined to be between 0.090 - 0.110 in-WC (22.4 - 27.4 Pa) so that it would not have a significant effect on flame spread results. Since sudden changes in draft pressure are found to essentially obstruct flame progression, FSI results are improved when fan control measures are implemented to stabilize the draft pressure within the main tunnel enclosure.