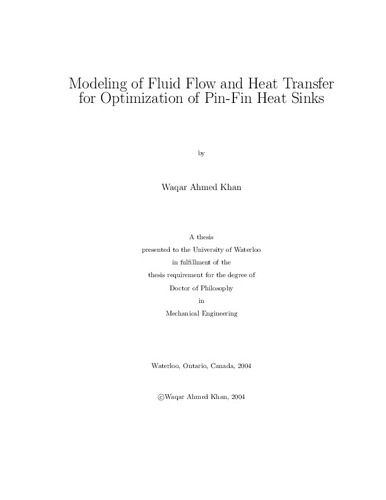 In this study, an entropy generation minimization procedure is employed to optimize the overall performance (thermal and hydrodynamic) of isolated fin geometries and pin-fin heat sinks. This allows the combined effects of thermal resistance and pressure drop to be assessed simultaneously as the heat sink interacts with the surrounding flow field. New general expressions for the entropy generation rate are developed using mass, energy, and entropy balances over an appropriate control volume. The formulation for the dimensionless entropy generation rate is obtained in terms of fin geometry, longitudinal and transverse pitches, pin-fin aspect ratio, thermal conductivity, arrangement of pin-fins, Reynolds and Prandtl numbers. It is shown that the entropy generation rate depends on two main performance parameters, i. e. , thermal resistance and the pressure drop, which in turn depend on the average heat transfer and friction coefficients. These coefficients can be taken from fluid flow and heat transfer models. An extensive literature survey reveals that no comprehensive analytical model for any one of them exists that can be used for a wide range of Reynolds number, Prandtl number, longitudinal and transverse pitches, and thermal conductivity. This study is one of the first attempts to develop analytical models for the fluid flow and heat transfer from single pins (circular and elliptical) with and without blockage as well as pin-fin arrays (in-line and staggered). These models can be used for the entire laminar flow range, longitudinal and transverse pitches, any material (from plastic composites to copper), and any fluid having Prandtl numbers (&ge;0. 71). In developing these models, it is assumed that the flow is steady, laminar, and fully developed. Furthermore, the heat sink is fully shrouded and the thermophysical properties are taken to be temperature independent. Using an energy balance over the same control volume, the average heat transfer coefficient for the heat sink is also developed, which is a function of the heat sink material, fluid properties, fin geometry, pin-fin arrangement, and longitudinal and transverse pitches. The hydrodynamic and thermal analyses of both in-line and staggered pin-fin heat sinks are performed using parametric variation of each design variable including pin diameter, pin height, approach velocity, number of pin-fins, and thermal conductivity of the material. The present analytical results for single pins (circular and elliptical) and pin-fin-arrays are in good agreement with the existing experimental/numerical data obtained by other investigators. It is shown that the present models of heat transfer and pressure drop can be applied for a wide range of Reynolds and Prandtl numbers, longitudinal and transverse pitches, aspect ratios, and thermal conductivity. Furthermore, selected numerical simulations for a single circular cylinder and in-line pin-fin heat sink are also carried out to validate the present analytical models. Results of present numerical simulations are also found to be in good agreement.